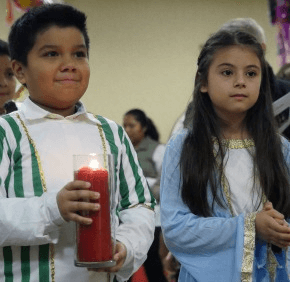 Just as Mary and Joseph must have rejoiced when they found a place to give birth to Jesus after being turned away by innkeepers, children fleeing gang violence and other hardships in Central America celebrated their arrival in their new Maryland home during a Dec. 19 posada at the Catholic Center in Baltimore.

The first-ever event, sponsored by the office of Hispanic ministry, featured the re-enactment of the Holy Family’s journey and rejection by innkeepers before finally being given shelter. Young people wore angel wings, shepherd’s robes and other costumes as they retold the biblical story. Among the participants were 65 children who had recently traveled by themselves to the United States to be reunited with family members living here.

In welcoming the families, Archbishop William E. Lori noted that Pope Francis said migrants and refugees do not only represent a “problem to be solved,” but are “brothers and sisters to be welcomed, respected and loved.”

“Our hearts are hurting and we are appalled as we hear of God’s children fleeing their countries and crossing multiple borders,” Archbishop Lori said, speaking in Spanish. “The vast majority seek refuge from horrific trauma, surging violence and extreme poverty.”

Archbishop William E. Lori welcomes children from refugee families during a posada celebration at the Catholic Center in Baltimore Dec. 19. (Karen Osborne/Special to the Review)

During the posada, the archbishop offered a special blessing and presented the children gift bags packed with toys and other supplies. Festivities included the singing of traditional songs and a feast of tamales. Children took home colorful piñatas and bags of candy from Central America and Mexico.

Erick Cordoba, a 17-year-old parishioner of St. Mary in Annapolis who arrived in the Baltimore archdiocese four months ago, told the Catholic Review he fled his native El Salvador because of fear. He is now living with his aunt and uncle in the Annapolis area.

“The violence in my country is very bad,” he said through a translator. “There are a lot of guns. By their words, they (gang members) psychologically mistreated me.”

Cordoba fled Chalatenango by traveling by bus and car to the U.S.-Mexico border. He then crossed the border and walked for an hour in the desert before being captured by U.S. immigration officials.

Cordoba is now in the process of completing legal requirements to remain in the United States through deferred action for childhood arrivals – a special process for certain undocumented youths to remain legally in the country and be eligible for employment authorization for a period of two years.

Rosita Morales, Samantha Munoz, and Carla Godoy of St. Joseph Parish in Cockeysville sing during the posada celebration at the Catholic Center in Baltimore Dec. 19. (Karen Osborne/Special to the Review)

Antonia Aleman, Cordoba’s aunt, said the Catholic Church has been invaluable to helping her family. The Esperanza Center, a Catholic Charities outreach based in Fells Point, helped find a public school for her nephew to attend in Annapolis and is assisting with his documentation.

“I feel very, very happy and full of gratitude because I feel that the church is accompanying us,” she said through a translator.

Asked what she thinks about the immigration debate in the United States and the statements of Republican presidential candidate Donald Trump about building a wall along the Mexican border, Aleman shook her head.

“It makes me very sad and to be afraid that we can be separated as families when I hear that Trump says that everyone needs to go back,” said Aleman, who arrived in the United States 17 years ago from El Salvador and has a permit that is renewed every two years to remain in the United States.

Darlene Agustin opens presents they received from Archbishop William E. Lori during a posada celebration at the Catholic Center in Baltimore Dec. 19. (Karen Osborne/Special to the Review)

Aleman’s husband, Manrique, said his family feels welcome in the Archdiocese of Baltimore.

“My wish is that many more families can come to the church and see the same support,” he said.

Aleman, a St. Mary’s parishioner, said faith his at the heart of family life. When Erick first arrived in Baltimore, she took him straight from the airport to church. She was receiving training at the parish as an extraordinary minister of holy Communion.

“What most moved me was to go and give thanks to God that he had a safe journey crossing the border and he was OK,” she said.

Comboni Missionary Sister Maria Mercedes Castillo Razo, director of Hispanic ministry in the Baltimore archdiocese, said families who participated in the posada were found through parishes. She noted that one pastor didn’t believe there were any refugee children in his parish, only to discover there were several.

On the pope’s birthday, Archbishop Lori presents him with Maryland gift