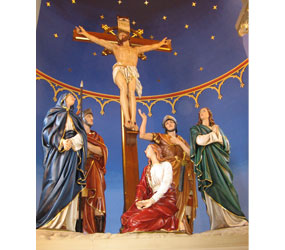 One hundred years after the Emmitsburg chapel was erected, artisans have restored its fading statues and Stations of the Cross. They painted the interior dome a deep blue, which gives an illusion of great depth. They’ve also painted the interior in a various shades of beige, blue, red and gold.

About a dozen seminarians provided the muscle to take down six statues from the high altar – each figure weighing at least 250 pounds and standing 6-foot tall or more. The Italian statues, part of a set depicting Christ’s crucifixion scene, were painstakingly repainted in vibrant colors by Mary Birkos – an artist working for A.T. Merhaut Inc. of Pittsburgh. The art was returned to its perch in March.

“We didn’t have any huge equipment, so we just figured we’d do it the way they did it 100 years ago – with sheer manpower,” said Adam Miller, a representative of A.T. Merhaut Inc.

“The details are remarkable,” he said. “Every bone is visible in Jesus’ ribcage. The musculature is phenomenal.”

Monsignor Steven Rohlfs, president-rector of Mount St. Mary’s Seminary, said the seminary is now planning summer work that will include the restoration of the stained glass windows, slate roofs and electrical systems.

“The electrical wiring in some places is so old that the Smithsonian Institute is interested in it,” he said. “They were just amazed that it’s working.”

Last year, a new Walker custom digital organ was installed by the Buch Church Organ Company of Ephrata, Pa. Donated by the Knights of Columbus, the instrument reproduces the sounds of great European organs.

In addition to the high altar, others to St. Joseph and the Blessed Virgin Mary have been restored. Altars to St. Ann and the Sacred Heart of Jesus will be restored this summer. Sconces and candle holders have also been refurbished.

Monsignor Rohlfs estimated that the entire restoration effort, which is being overseen by Jim Mills of Rubeling & Associates in Frederick, will cost between $2.5-$3 million. It is being financed through the support of bishops who send seminarians to Mount St. Mary’s, as well as donations from priest alumni and other donors.

The rector called the chapel the “heart of the campus” for both the seminary and university.

“It holds a lot of memories for an awful lot of people,” he said.