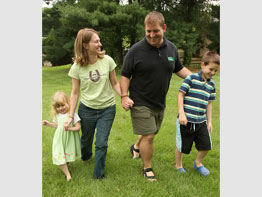 Like many young couples, Nissa and Guthrie Quill hoped to live their dreams in retirement. Unlike those who look forward to golf or travel, however, the Quills’ dream was to serve as missionaries. Four years ago, they decided they couldn’t wait.

“We felt that we were starting a new era of life … a life of service,” said Ms. Quill, noting that the birth of the couple’s second child and serving as live-in caregivers for Mr. Quill’s 85-year-old grandmother on her family’s horse farm in Ijamsville, only further inspired the couple to answer that call. “We also began to realize – on the precipice of both birth and death, between (daughter) Georgia and Grandma – that life was very short and that we didn’t want to waste time.”

The Quills will leave July 31 for Honduras as a volunteer family at La Finca del Nino, The Farm of the Child (farmofthechild.org). They have made a two and a half year commitment to live, work and pray in this Catholic faith-based community which provides food, housing, education, and health care to 100 Honduran orphans.

Not an impulsive leap, their decision was years in the making.

“I grew up Protestant,” said Ms. Quill, who joined the Catholic Church two years ago, “and knew a few young adults with missionary aspirations. I was jealous of them because, although I wanted to do something like that, I thought I wasn’t good enough. I also was afraid that any man interested in the same thing would be too much of a goody-two-shoes for me.”

She did find such a man, and 10 years into their marriage Ms. Quill and her husband embarked on a journey of discernment – reading biographies of missionaries, speaking with Finca volunteers, talking with their parish pastor at St. Ignatius of Loyola, Ijamsville (where Mr. Quill’s grandparents, Dr. A.E. and Marjorie Verdi, were founding members), discussing it with close friends and family members, and praying, praying, praying.

When they started researching opportunities they found only three programs offering long-term service for Catholic families, and only one – the Finca – that would accept children as old as their son, Andrew, now 9 years old. “But we loved their mission, we loved what they were doing,” Ms. Quill explained. “Basically, we felt that if this is the only place where we can serve, then this must be where God’s calling us to serve.”

“About the same amount of time we’ve been looking at going there,” Ms. Quill said, “(Finca directors) have been looking to find a couple to come down and take over their adolescent independent living program. When they called us, they said, if you don’t come, we won’t have anybody to do this because you’re the people we’ve been looking for.”

When Finca children finish the equivalent of junior high school, they move from small homes on the farm to two supervised homes for adolescents in the city of La Ceiba, where they attend high school and receive advanced vocational training.

Qualifying them to oversee this transitional program are Ms. Quill’s experience with teenagers as a Spanish and French teacher at Walkersville Middle School in Frederick County, combined with Mr. Quill’s background as a former police officer with Montgomery County and recent completion of an MBA in organization development from Johns Hopkins University.

The Quill children are just as excited as their parents about the adventure ahead. Ms. Quill said her son is “a little sad to be leaving his friends,” but eagerly anticipating the abundance of reptiles and being homeschooled. According to mom, 4-year-old Georgia’s main question has been, “Are we going to live in the same jungle with Diego (from the TV show, “Dora the Explorer”)?”

Ms. Quill has no qualms about leaving behind middle-class American comforts.

“The one sacrifice I really feel right now is leaving my family,” she admitted. “My husband’s family is very close. All of my family I see or talk to on a daily basis. So we’re a big part of each other’s lives. But the sacrifices are pretty small compared to the rewards.”

Although the Finca provides food and lodging, volunteers are responsible for covering all other costs necessary to support their stay. The Quills will eventually have to raise almost $40,000 to pay for the family’s health insurance, four weeks of language training and air transportation, as well as any other expenses.

They were hoping to make enough from the sale of their home in Hyattstown to cover those costs, but the collapse of the housing market has made that difficult.

“It was really hard for my husband and I to think about asking people for money,” Ms. Quill said, “but it allows people to participate, to have a personal connection with people who are in need.”

The family hopes to maintain communication through online blogs – even Andrew will have his own – via their Web site.

“God calls people of all different levels of spirituality, and all different places in life,” Ms. Quill said. “It doesn’t have anything to do with your goodness or your ability. It has everything to do with his goodness and his power. It’s really easy to think, ‘Oh, you’re going to be a missionary, you must be a saint.’ But (God) completely calls you in spite of all your frailties and manages to make something wonderful out of them.”

Those wishing to support the Quills can make tax-deductible contributions on the family’s Web site, www.ubicaritas.org. Donations can also be made by mail, check payable to Farm of the Child, 1616 Nottingham Knoll Drive, Jacksonville, FL 32225. Designate “Quill Family” in the appropriate space.