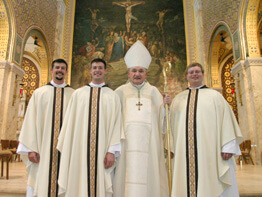 GREEN BAY, Wis. – For the second time in its nearly 140-year history, the Diocese of Green Bay has ordained twins to the priesthood.

Fathers Joel and Ben Sember, 27, were ordained June 30 by Bishop David A. Zubik at St. Francis Xavier Cathedral in Green Bay. Father Andrew Kysely was ordained with them.

To mark the occasion, Bishop Zubik used artifacts from previous bishops of Green Bay, including the crosier of Bishop Joseph Melcher, Green Bay’s first bishop, who served from the founding of the diocese on Dec. 3, 1868, to his death in 1873.

Although the Sembers originally were believed to be the first priest-twins in the diocese, further research showed that Green Bay Bishop Stanislaus Bona ordained Fathers David and Donald Van Stralen May 29, 1965. The two resigned from the priesthood together nearly 10 years later.

The two oldest sons of James and Marion Sember of Burlington, who are identical twins, recently completed three years of training at the Pontifical North American College in Rome. Father Ben will return there this fall for studies in canon law. For the summer, he will serve at the diocesan marriage tribunal and help at three local parishes.

Father Joel will immediately begin parish work, serving as associate pastor at two parishes. He also will work in campus ministry at the Newman Center at the University of Wisconsin-Oshkosh.

“Rome is neat,” he said. “It’s an experience, both in terms of culture and faith, but I really am looking forward to doing pastoral ministry.”

The priesthood was not in the picture for them at the start. The twins were not raised in the Catholic faith and attended several churches in their youth. Their father had been raised Catholic, but was not practicing; their mother had been a Presbyterian.

Father Joel, especially, had an adjustment period when the family – which includes five younger siblings – joined Sacred Heart Parish in Sherwood when the twins were 12. They later joined St. Mary Parish in Chilton.

“At first, I was pretty put off by the Catholic Church,” he told The Compass, Green Bay’s diocesan newspaper. “The idea of having to obey some pope, and the idea of praying to saints, it all seemed kind of strange to me. It was something I struggled with and I started to ask a lot of questions.”

Those questions led to more questions and ultimately “led me deeper and deeper into wanting to choose the Catholic faith,” he added.

Before long, their father was a sacristan at Sacred Heart and later St. Mary and his sons became altar servers. Their pastor was a frequent family visitor.
“I think that was the start of it,” Father Ben said of his vocation, “the friendship of the priest.”

As he got to witness that priesthood in action, especially as an altar server, Father Ben grew to appreciate being part of the celebration of Mass. He also noticed a difference between the Catholic approach to faith and the Protestant approach.

“It’s not just that Catholics talked about Mary more often,” he said, with a chuckle. “The whole approach was different.”

And that approach – the focus on a deep-seated belief in all aspects of faith and not just on a personal relationship with Jesus – was most apparent to Father Ben at Communion.

“In the Lutheran church, we received Communion, but it wasn’t as significant,” he told The Compass. “In the Catholic Church, you took it more personally and it transformed you personally.”

For Father Joel, the questions he had about the Catholic faith continued and led him into more study. And it taught him patience.

“My generation is in a bit of a hurry,” he said, “and expect things to be instant. And so we might say a few words to God, listen for 30 seconds and say, ‘Well, I guess he’s not talking to me.’ But God works very slowly. … He’ll wait and let us talk. And wait until we’re good and finished before he’ll respond.”

Both twins said their parents have been supportive along the way – although both remember when their mother had been wary of both the faith and of religious vocations for any of their children. Father Joel said that his parents have always had “a very active and lively” faith that has led them to “really look for an eternal kind of belief.”

The brothers said they enjoyed having each other to share their seminary journey with, although Father Ben said he wishes people wouldn’t always just see them as “the twins” but as people with “very different personalities.”
Father Joel pointed out that they enjoy different hobbies too. Father Ben is more into writing, photography, biking, martial arts and running. Father Joel enjoys biking, soccer and basketball and maintained a small Web site about seminarian life.

But Father Joel said having his brother at his side so long has mostly been an asset. “He’s been there to encourage me when I needed it. And to tell me to quit complaining when I needed that, too.”