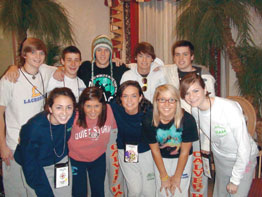 OCEAN CITY – The hearts of members of the St. John the Evangelist, Hydes, youth group were in the right place Nov. 22, as they entered the frigid waters of the Atlantic Ocean for a charity plunge.

They just didn’t know exactly for whom they were submerging themselves.

The group members, in town for the Baltimore Youth Catholic Conference, thought they were taking part in their own Polar Bear Plunge to raise money for a sister parish in Haiti.

Their youth minister thought they were trying to raise funds for their own parish. In the end, Haitian parish St. Guillaume won and everyone was happy, if a little bit cold.

“Right now they’re really poor, and they don’t have a lot of food, supplies or anything for educating their kids,” Jess Szczawinski, a junior at Notre Dame Preparatory School in Towson, said of the sister parish. Having never seen most of the children who could benefit from their jump, the teenagers braved outdoor temperatures that were in the low-to-mid 30s and an ocean temperature that was even lower. They raised funds before their jump and continue the effort now as well.

The group of 10 high-school-aged parishioners sat inside the warm lobby of the Clarion Hotel hours later, still relishing their jolt-inducing moments in the water.

Adrenaline took over and fears were allayed, they said, as they walked to the edge of the water. The feeling of sand between their toes did not tickle as it does on summer days. Instead, the cold surface made them dash for the water even more.

Some dipped their heads below the surface of the water, while others shivered once inside the water. Once they were settled, however, supervisors wanted to make sure safety came first.

They came back, having endured the journey together, sticking to their commitment to each other and their sponsors.

“They are a really great group of kids,” St. John’s youth minister, Colleen Sisolak, said. “They are really looking to do good things for people consistently.”