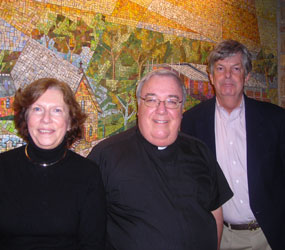 HYDES – Nineteen parishes in the Archdiocese of Baltimore adopt sister faith communities in the Diocese of Gonaives in Haiti, to the north of Port-au-Prince.

None have given more in recent years than St. John the Evangelist in Hydes. That charity was evident at all of its Masses the weekend of Jan. 16-17, when the parish did its part to support the most impoverished nation in the Western Hemisphere after it was devastated by a Jan. 12 earthquake.

Father William F. Franken, pastor of St. John the Evangelist, readily granted a request from Dr. James W. Taneyhill that he address the faithful at every Mass and encourage them to heed Archbishop Edwin F. O’Brien’s plea for a second collection for Haiti, with the proceeds to be directed to Catholic Relief Services.

It was nothing new for the northeast Baltimore County parish, which sent more than $290,000 to Haiti over a recent two-year period. It feeds 1,000 students and pays the salaries of 44 teachers in six schools in the Gonaives parish of La Chapelle, but the goodwill from Hydes goes beyond fundraising.

Taneyhill, who bases his dentistry practice in Bel Air, has made at least 10 trips to Haiti, giving care to hundreds.

“What we do is not fun,” Taneyhill said. “but the need is so great and the only way this world makes sense is if those who have been gifted give to those who have not. … There’s a plaque at my old school that reads ‘Men for Others.’ That has something to do with why I do this.”

Taneyhill was referring to Loyola Blakefield in Towson, where he was a member of the Class of 1965.

He heads an Operation Haiti parish committee that includes Phil Miller and Nikolay Ratajczak, who coordinate micro-loans to the women of La Chappelle parish; Dave Mahoney, who lends his skills as a French speaker; and Jan Allen, the head of the English department at the Essex campus of the Community College of Baltimore County.

St. John the Evangelist has also been helping Father Jean Baptiste Leroy, the current pastor of La Chapelle parish, as he recovers from lung surgery in Boston.

The afternoon the earthquake hit Haiti, Allen represented St. John the Evangelist at a regularly-scheduled meeting at the Catholic Center of parishes that participate in Operation Haiti, the outreach directed by Deacon Rodrigue Mortel.

“As the night went on,” Allen said, “his phone started ringing and never stopped.”

Deacon Mortel was scheduled to depart Jan. 19 for his homeland, where his surgical skills as an obstetrician and gynecologist, along with his fluency in French and Creole, are desperately needed.

His family foundation and the archdiocese have opened several schools in Gonaives, which were unharmed by the earthquake.

According to Agnes Supernavage, who assists Deacon Mortel, the need in Gonaives will multiply as some flee Port-au-Prince.

“With additional people coming,” Supernavage said, “it will strain an already very tedious equilibrium in many communities.”

Taneyhill has already been able to relay that urgency to his fellow parishioners at St. John the Evangelist.

“With three people on most trips and what we want to do there, our budget is $100,000,” Taneyhill said of one of his typical visits to Haiti. “All the fundraising is done in the parish.

“Every September,” he continued, “we’re good for around $60,000 in a special collection. Father Willie (Franken) allows us to take the poor box and last donation of each quarter, that’s four times $5,000. We’ve got some amazingly generous people. A man who prefers to remain anonymous donated $20,000.”

Taneyhill said that St. John the Evangelist’s support of Operation Haiti is made possible by business manager Matthew Gutberlet and, most importantly, Father Franken.

“We need to live out the Gospel,” Father Franken said. “These are the least of our brothers and sisters. Our Haiti committee just took the ball and ran with it.

For more information about the Archdiocese of Baltimore’s Operation Haiti outreach, visit. www.baltimorehaiti.org.