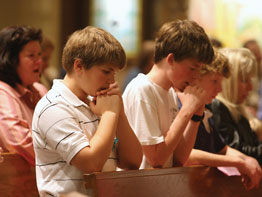 Parishioners of St. John The Evangelist sat in the pews of the Hydes church Nov. 8 sobbing, hugging one another and looking for solace. Parents wiped away tears of their young sons, some of whom were clad in Cub Scout uniforms.

They had come for a prayer service to mourn the loss of two of the parish’s members, 31-year-old Katherine Brady and her 8-year-old son, Wilson. Both died in an auto accident on the U.S. Route 1 bypass in Bel Air.

Also involved in the accident were the father, Stephen, 32, and younger son Ian, 2. Mr. Brady was still in the hospital in critical condition at Maryland Shock Trauma while Ian was released from Johns Hopkins Children’s Center.

“We come together as a family,” Father William F. Franken, the pastor of the church, said during a short address to the mourners.

Many needed to only look at another familiar face walk through the door before emotions took hold. St. John The Evangelist School principal Jean Delcher fought back her own tears as she embraced students and parents. Wilson was a third-grader at the school and a Cub Scout.

“They needed to be together,” Ms. Delcher said of the community’s prayer service. “Everybody had heard the news through various ways on Friday night.”

The mourning continued for days, including inside the school, Mrs. Delcher said. A response team from the Archdiocese of Baltimore went to the school to help with the grieving process. Many of the third graders had been friends with Wilson since kindergarten or before.

“Our children are doing beautiful,” Mrs. Delcher said. “We tried to keep the day as normal as possible. We prayed together over the loudspeaker and made a school prayer chain.”

A memory wall had also been created inside the school, she said.

The school, which has an enrollment of more than 250 students, is a close-knit community which is celebrating its 150th anniversary this year. Mrs. Delcher said Wilson’s death was one of the most difficult experiences of her career. She said she could not imagine the loss felt by Mr. Brady.

“They were a loving family,” she said. “Steve loved his children and his wife deeply.”