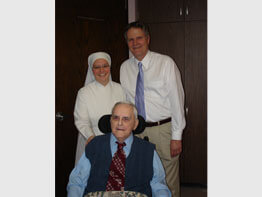 Henri Breaux is a welcome addition to Baltimore.

A 95-year-old resident of St. Martin’s Home for the Aged in Catonsville, Mr. Breaux’s handsome smile and zest for life enable him to make new friends easily wherever he goes.

Mr. Breaux, along with two of his sisters, was evacuated in 2005 from a nursing home in New Orleans to a facility in Baton Rouge, La., in anticipation of Hurricane Katrina slamming into the Gulf Coast. Their original nursing home suffered too much damage and left the Breaux siblings in need of a new home.

Thanks to the generous financial support of an anonymous donor, the siblings were flown to Baltimore and became residents of St. Martin’s. Bertha Breaux died at the age of 102, leaving Mr. Breaux and Odette Breaux at the home.

Run by the Little Sisters of the Poor – the same order that includes Mr. Breaux’s niece Cecile in Mobile, Ala. – St. Martin’s specializes in the care of seniors.

Providing loving care and a well-kept facility, St. Martin’s relies on a number of local volunteers. Rick Holzman, a parishioner of St. Alphonsus Rodriguez in Woodstock and an engineer at Northrop Grumman, visits Mr. Breaux regularly.

“He’s just this great older gentleman who has been through a lot and yet seems to take it all in stride,” said Mr. Holzman. “He speaks of his years as a medic during World War II and his love of old, classic, black and white movies.”

While getting to know his new friend better, Mr. Holzman learned of Mr. Breaux’s full and rewarding life. An Army medic in World War II, Mr. Breaux was stationed in the Pacific theater. He then returned to his native roots in New Orleans and began serving in a different way.

Starting in 1946, Mr. Breaux welcomed guests as a bellman at the Hotel Monteleone, a French Quarter landmark that opened in 1886. Mr. Breaux’s eyes sparkled as he shared his memories with a raspy voice and a strong Cajun French accent.

“I loved working at the hotel. I met many people and even some famous ones,” said Mr. Breaux as he pointed to the wall of his room, where several vintage photos hang and preserve his memories.

Mr. Holzman contacted the hotel to share Mr. Breaux’s story with them. To Mr. Breaux’s surprise, a package of Monteleone memorabilia arrived.

“For Christmas I was able to find a picture of the hotel and got it framed to put on the wall,” Mr. Holzman explained. “I just thought getting more items from a place that obviously provided happiness for him would lift his spirits and keep those memories alive.”

Andrea Thornton, director of sales and marketing for the Hotel Monteleone, was inspired by Mr. Holzman’s request.

“It’s not often such a wonderful story just drops in your lap, so when Rick asked for hotel items, we got a care package together and sent it on. We also found a copy of an old brochure that has Henri’s photo on it. What Henri did was jar a lot of fond memories in both Baltimore and New Orleans,” Ms. Thornton said.

Mr. Breaux’s French Quarter memories are alive and well, as the sisters at St. Martin’s name Mr. Breaux their “Mardi Gras King” for their annual celebration. In celebratory photos, Mr. Breaux proudly wears a crown and other festive accessories. In that moment, Mr. Breaux, a bit hard of hearing and a double amputee, truly is the king.