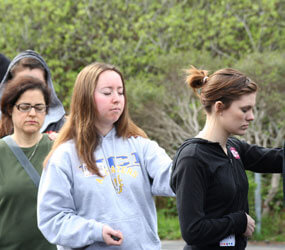 WASHINGTON – Two Pennsylvania girls took a day off of work to take part in an annual Food Fast that has become a Lenten tradition for many Catholic parishes.

“It has impacted them in a way that they keep coming back,” said Cathy Savilla, youth minister for three parishes in West Virginia.

Food Fast is a 24-hour hunger awareness retreat for Catholic youths, focusing on global poverty and hunger. The program, which has been active since 1999, runs under the direction of program officer Jennifer Swope of Catholic Relief Services in Baltimore, the U.S. bishops’ international relief and development agency.

Food Fast offers a journey of solidarity with people overseas as a way of living out the Catholic faith.

Grounded in Catholic social teaching, Food Fast teaches youths about issues faced by their peers in the developing world; encourages youths to take action on behalf of the poor and hungry; and invites youths to share their perspectives and knowledge about the world with their community to create lasting change in the world.

The overall theme of the program is hunger awareness, but CRS picks a subtheme from school year to school year. The 2010-11 subtheme focuses on how climate change affects the hungry people of the world and how God cares for his creation.

“There is always something locally that you can relate to the global theme,” said Savilla, who had collaborated with neighboring churches to put on a 120-participant youth retreat.

Swope said the 2011-12 subtheme is still a work in progress, but it will initially be centered on caring for the poor and how one’s choices affect others’ access to food.

The Food Fast program offers a curriculum for the parishes that participate, providing icebreakers, prayers, discussion topics and fliers.

Swope said Food Fast is often used during Lent, especially during Holy Week, but the resources are available throughout the year.

“We provide everything,” said Swope, but the youth ministers use their creativity and “they make it their own.”

Natalie Lies, a youth minister at St. Anthony of Padua Parish in Fargo, N.D., was planning her fourth Food Fast event this Lent, using both the curriculum offered by CRS and her own ideas. For the first time, her parish will invite Catholic parishes from around the diocese to take part in the event.

“It plays in the theme of Lent of prayer, fasting and almsgiving,” said Lies, who has been serving the parish for five years, ministering to 20-30 youths.

Lies said they start their Food Fast on a Friday evening with the living Stations of the Cross, a Lenten Catholic tradition that remembers the way of Christ’s death, and run through Saturday evening.

Last year, youths listened to testimonies given by missionaries, volunteered with homeless organizations, and spent reflective time in prayer during the fast.

“You don’t eat any solid foods,” said Lies, who hopes the youths see that for them the fast is a choice for only 24 hours, while for others hunger is a reality some people face every day of their lives.

Swope said youths are always being encouraged to go out and change the world, but Food Fast shows them how to do that.

Sue Matour, youth minister of St. Teresa of Avilla Parish in Norristown, Pa., said it gives youths a chance to do something for both the community and raise awareness globally.

“As Catholics, we are called to not only look locally but also internationally,” said Matour, adding that Food Fast is one of her favorite youth group activities.

Matour said she was impressed with how young people take ownership of the activities and unite together in sacrifice during a short period of time. During the fast, her youth group in the past had volunteered at a soup kitchen in Pennsylvania, which was “eye opening for them.” The youths made food for others, while they themselves went hungry.

Fundraising has become an additional option for Food Fast, with CRS offering three programs to which parishes can choose to donate: Peace in Sudan, Water in Afghanistan and CRS programs around the world.

After the 2010 earthquake in Haiti, many parishes asked that their money be sent for the relief of the country. Swope said that half of the money CRS received was raised for Haiti.

Food Fast is often connected in parishes with Operation Rice Bowl, CRS’ Lenten program that encourages Catholics to give up a meal and donate the money saved to help fund development programs designed to increase food security across the world.

Both youth ministers and CRS have found Food Fast to be a great Lenten tradition.

“It’s a blessing, the resource has been a wonderful opportunity to gather our community together to put on a good retreat,” said Savilla.

More information about the Food Fast program of Catholic Relief Services can be found at www.foodfast.org. Materials are in Spanish and English.