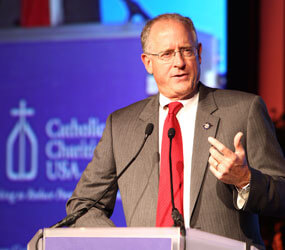 WASHINGTON – Hundreds of Catholic Charities leaders and staffers took to Capitol Hill Sept. 28 to promote new legislation that they believe could transform the U.S. approach to fighting poverty.

Participants in Catholic Charities USA’s centennial gathering in Washington visited their senators and representatives on the convention’s final day to urge support for the National Opportunity for Community Renewal Act, introduced that day by Sen. Bob Casey, D-Pa., and Rep. Jim McGovern, D-Mass.

The $125 million bill, drafted by Catholic Charities USA itself, would set up 10 community demonstration projects, including three in rural areas and one near a military base, that would operate with more up-to-date poverty measures and create “individual opportunity plans” for each client.

“With this legislation, today we tell the tens of millions of Americans living in poverty that there is a new hope,” said Father Larry Snyder, president and CEO of Catholic Charities USA, in a breakfast talk Sept. 28. “That they are not destined to live in poverty for their entire lives. That with the help provided in this legislation, people in need will be propelled onto a path of self-sufficiency, enabling them to achieve new legacies of health and happiness for their families.”

In a fact sheet on the legislation, Catholic Charities USA acknowledged that the bill “will not make it through Congress this session,” but added, “We feel that a conversation on poverty needs to be had, and your support for their bill will help start that conversation.”

The legislation would establish three targeted levels of social services – services to prevent people from falling into poverty, services to help those who have fallen on hard times recover and services for those who require long-term support to live a dignified life.

It also seeks to develop an adequate measurement for evaluation of poverty-relief programs through the gathering and analysis of qualitative information alongside quantitative data to illustrate the success or failure of existing programs.

Poverty levels would be based on the United Nations’ Human Development Index and the supplemental poverty measurement being developed by a task force of the U.S. Census Bureau, rather than the current formula developed in 1964. Critics say the present formula relies too heavily on the cost of groceries, when other expenses such as housing, clothing and utilities have risen at a faster pace than food costs.

In a talk to convention participants about the legislation Sept. 26, Candy S. Hill, Catholic Charities’ senior vice president for social policy and government affairs, said poverty is “too complex, too personalized to be solved by a ‘one-size-fits-all’ approach.”

“We need a system that has as its first priority the desire to guide people onto a path of self-sufficiency and dignity, and away from the safety net,” she added. “This is not charity; it’s justice, and we must demand it.”

Hill said it “has been more than 40 years since this country has experienced a truly transformative moment for social change.”

“Now is the time for a new conversation on what it means to live in the poverty in the United States in the 21st century,” she said. “We need to use this economic crisis to create a new economy that does not leave out millions of people.”

Hill spoke less than two weeks after the Census Bureau announced that the number of Americans living in poverty in 2009 was 43.6 million, or 14.3 percent of the population, compared to 39.8 million people, or 13.2 percent of all Americans, the year before.

“43 million! That number is neither acceptable nor sustainable,” she said. “I don’t know about you but my commitment to this work is measured by seeing less people each year, not more.”

Catholic Charities USA has been working for several years on its Campaign to Reduce Poverty in America, with the goal of reducing poverty by 50 percent by 2020.