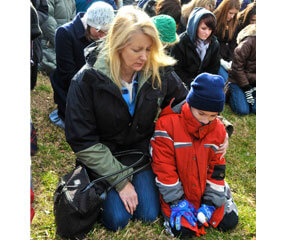 GERMANTOWN – About 300 people stood outside a Germantown abortion clinic in biting cold weather for several hours Dec. 6 to protest the arrival of LeRoy Carhart, a controversial doctor from Nebraska who performs late-term abortions.

Carhart left Nebraska to come to Maryland after his state passed a law prohibiting abortion after the 20th week of pregnancy. The doctor will also perform abortions at a clinic in Iowa. The Washington Post reported that Carhart chose the Germantown location based on a number of factors, including which jurisdiction had the most favorable laws for abortion.

Rev. Patrick Mahoney, director of the Christian Defense Coalition and a lead organizer of the protest, said, “We don’t want Maryland to become the late-term abortion capital of America.”

One of the first things the minister asked the crowd to do was kneel and pray to God, asking his forgiveness and his guidance on how to proceed. The crowd – consisting of many families with young children, young adults and some elderly – knelt in prayer on the cold grass.

“We will not be silent. We will stand. We will pray, and we will march,” Mahoney said. He also encouraged people to visit the web site, kickoutcarhart.com, for updates and information on Carhart.

Many of the pro-life protesters held signs and wore T-shirts with pro-life slogans. Only a handful of pro-choice supporters gathered outside of the abortion clinic that is part of a larger business park. The area was heavily guarded by police who enclosed it with security tape.

Mahoney asked people to refrain from using the business park until the abortion clinic is shut down as a form of protest.

Jamie Morrison, a high school senior and a parishioner at St. John Neumann Parish in Gaithersburg, held a graphic image of an aborted baby.

Morrison said he hopes people will see, “what goes on behind closed doors (at the abortion clinic), and bring what is going on here out in the open.”

Christa Lopiccolo, executive director of life issues for the Archdiocese of Washington, said the archdiocese is opposed to Carhart’s practice and all threats against innocent human life.

“Carhart, as a proponent of late-term abortions, represents the failure of Maryland legislation to protect these vulnerable children – children who, in different circumstances, would be rescued by the advances in medical science and allowed to survive outside the womb. His arrival points to the laxity of Maryland law – of all 50 states, Maryland was the most amenable to his particular business,” she said.

Joan Gerard is a parishioner of Mother Seton Parish in Germantown, which is located just around the corner from the abortion clinic. She said that the clinic has been operating for many years, and that some people in the parish, including herself, have grown complacent.

“But when we found Dr. Carhart was coming,” she said, “we were all crazed … Boy, is this a wake-up call. He is the only advertised abortionist who will do late-term abortions in Maryland. It’s scary to have that kind of violence in the neighborhood.”

Lopiccolo said the archdiocese is encouraging Catholics to join them this Saturday, Dec. 11, for a Witness to Life event that begins with an 8 a.m. Mass celebrated by Washington Auxiliary Bishop Martin Holley at Mother Seton Parish in Germantown.

The parish is located at 19951 Father Hurley Boulevard, Germantown, Md. 20874-2674. Following the Mass, people will prayerfully process to the clinic, pray the rosary, and then return in prayer to the church. The event will conclude at 11 a.m.

“The laws won’t change until we make our voices heard,” she said.

This article appears courtesy of The Standard, the newspaper of the Archdiocese of Washington.