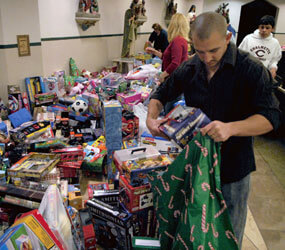 But the parishioners of Our Lady of Lourdes Church in Violet said the person who stole 65 Christmas gifts collected for the parish’s Angel Tree program in the early morning hours of Dec. 20 ignited a positive surge of donations and Christian charity that more than made up for the brazen pre-Christmas theft.

“They had the Grinch, but we’ve got this,” said Our Lady of Lourdes parishioner Rainy Cook Dec. 22 as she wrapped some of the hundreds of replacement gifts that came flooding into the church after news of the break-in went global on cable news and the Internet.

“It’s a resurrection – having everything taken from us to new life,” said Father John Arnone, pastor of Our Lady of Lourdes Church, which reopened only a month ago after Hurricane Katrina nearly destroyed the church in August 2005 beneath 12 feet of water. “We probably got in about six or seven times as many gifts as were taken. The outpouring of generosity, support and concern has been overwhelming.”

The St. Bernard Parish Sheriff’s Office arrested Herman “Peter” Smiles, 45, on Dec. 22 for the theft. Deputies said he was on parole for a prior burglary conviction and had confessed to the crime, telling them he had done it after smoking crack. Deputies found six garbage bags filled with the church’s Christmas gifts in his home, located only about 100 yards away from the church.

The burglary was discovered Dec. 20 when a parishioner came to open the church for Sunday morning Mass and saw shredded wrapping paper all over the floor and the neatly wrapped presents gone.

The presents had been placed beneath a large crucifix for distribution to needy children and seniors before Christmas. The burglar used a cement block to break the glass of a rear door to the church, apparently cutting himself in the process.

“I was angry in the beginning, but now I just feel sorry for him,” Father Arnone said. “How could someone break into a church and steal presents for the needy? But then those feelings turned into sorrow for him because he must be sick or have major issues. He was a desperate person, and I pray for him, I really do.”

Father Arnone said the passionate reaction of neighbors and strangers to the crime became a Christmas parable. After CNN picked up the story, Father Arnone’s phone started ringing constantly.

“I’ve had people call me from Ohio and Wisconsin and other people who saw it on the Internet,” Father Arnone said. “They asked me, ‘Do you have a Pay Pal account so we can send you a donation?’ They asked for our address. This was an unfortunate need that happened, but so much good has come of it. Good will always triumph over evil, and this is another sign that we’re going to win – and we will win.”

The parish has been through its own trauma in the last four and a half years. It took all that time for the church to be restored after nearly being wiped out by Katrina, and at the rededication ceremony in November, teary-eyed parishioners talked about what it meant to have their home church back in service.

“For so long, New Orleans and St. Bernard have gotten the negative publicity – that we still ‘want’ from Katrina,” said parishioner Phyllis Diecidue. “This is what these people here are truly about. It’s not about our hands out. People here are still trying to rebuild and still trying to get back into their homes, but look around this church – they’re still giving.”

One man who came up to him outside the church particularly touched Father Arnone.

“He said, ‘Father, I’d like to give you more, but I want you to have this,’“ Father Arnone said. “He handed me some money and it was five $1 bills. He’s like the widow in the Gospel who gave her only coin. That means so much more than someone giving from his or her excess. It’s all about giving and sharing. This actually gave people an opportunity to do that.”