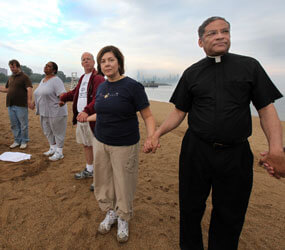 CHICAGO – The sunrise was invisible, but the hundreds of people who showed up at Masses and prayer services on five South Side beaches in the early morning Aug. 21 took it on faith.

Between 50 and 100 worshippers came out at each of the sites for back-to-school services to pray for an end to violence. The services were organized by the Black Catholic Deacons of Chicago.

The Gospel reading recounted Jesus calming the wind and the waves on the Sea of Galilee, and Deacon Leroy T. Gill, who preached at the service on Oakwood Beach, said that was what God did with overnight storms before the services started.

“There is a storm in the communities in which we live and serve, and we know the only way to bring about an end to this storm is to call on the mighty name of Jesus,” Deacon Gill said in an e-mail before the service. “When you are out on the beach in the early morning, you are reminded of the beauty that God intended for this land. God did not intend for there to be so much trouble in the land.

“So early in the morning when the creatures of the sky are flying in peace and the sun is coming over the land, what better place and way is there to pray for peace in the land?” he added.

At the service, the deacon said, “This is not a call for attention. This is a call to action. Don’t tell me this problem is too big for the church. It’s not too big if we have faith.”

A few miles further south, Father Matt Eyerman, pastor of St. Columbanus Parish, took off his alb and stole and plunged into the lake, to show how everyone is immersed in a culture of violence.

“I have done so many funerals for kids, and it hurts,” Deacon Gill said. “It hurts when you turn on the TV and another child has been shot. It hurts.”

Booklets containing information about violence and steps that people can take to stop it were distributed at all of the services.

“This is learned behavior,” Deacon Gill said. “These children were not born to kill. They learned it. And a lot of the time, they learned it in our homes. The hatred is in our hearts.”

At the end of the service, he and other ministers called forth police officers who were in attendance and blessed them, then blessed anyone else who came forward.

Such blessings happened at all five services, which were held in English at 12th Street Beach, Oakwood Beach, 63rd Street Beach and Rainbow Beach. A Spanish Mass was celebrated at 31st Street Beach.

Deacon Gill said he had worried that bad weather would stop people from coming out. “So at 5:30, I talked to God, and said, ‘I’ve got to start setting up at 6 o’clock,’“ he said.

By 6 a.m., the rain had stopped, leaving the services to start in the mist and the fog. The gray skies gave way by the time services ended to a patchy blue sky with peeks of sunlight.

“I truly believe the Bible where it says if two or three are gathered in God’s name, he will hear our prayers,” she said.