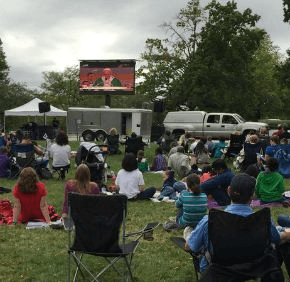 Pope Francis may have been in Philadelphia, but that did not deter more than 400 from joining the celebration in the city of Brotherly Love by viewing the Mass on the lawn of the Cathedral of Mary Our Queen in Homeland.

The event brought young and old and even a dog together to watch the Ravens’ first home game on a large-screen TV in advance of the papal Mass. With a few minutes left in the fourth quarter and the Ravens behind by four, the channel was changed to pick up the beginning of the Mass, after a pre-recorded video greeting from Archbishop William E. Lori, who was in Philadelphia with the pope.

Mary Sewell said she had been following all the papal events during the week. “Even though we’re Catholic, he’s spreading the message to all faiths, the glorious message. The community of Baltimore desperately needs to hear that message.”

“This is definitely the people’s pope,” she said.

Sitting nearby before Mass, Mazalean Benner, who prefers radio to TV and followed the papal visit through that medium, noted how “people just gravitate toward him and love him. … He’s bringing people together.”

Benner said she loved the way the pope was always smiling, and referred to the Virgin Mary as the untier of knots.

Thomas and Annie Kelly and their two daughters sat on a picnic blanket as they watched the Mass. Thomas said the pope’s message about moving forward and being charitable to those on the margins resonated with him. The actions Pope Francis does, especially the visit to the school in Harlem, N.Y., and the homeless shelter in Washington show his presence. “He leads by example,” he said.

Annie noted that he is humble and open to all religions. “I’m Buddhist – they’re Catholic,” she said, gesturing to her husband and daughters, “but I still love him.”

Beth Awalt of the Catholic Community of South Baltimore, wore a red t-shirt that read, “humility. Pope Francis,” which she had picked up a while back at a National Catholic Youth Conference.

“I’m most impressed at how he is reaching out to non-believers and non-Catholics.” Awalt praised the pope’s emphasis on social justice and the right things we should be prioritizing. “He’s been so much with the people – at the prison, at Catholic Charities. He’s taking advantage of his status to show people what’s really important.”

For more stories about the papal visit, click here.