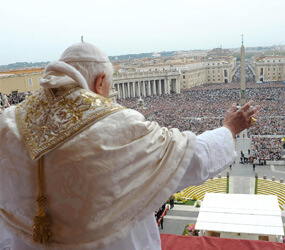 VATICAN CITY – Christ’s resurrection is not a myth or fairy tale; it is the one and only event that has destroyed the root of evil and can fill the emptiness in people’s hearts, Pope Benedict XVI said in his Easter message.

But Christ still wants humanity to help affirm his victory by using his weapons of justice, truth, mercy and love to end the suffering in Africa, build peace in the Holy Land, and combat hunger and poverty worldwide, he said April 12 in his message “urbi et orbi” (to the city and the world).

“Africa suffers disproportionately from the cruel and unending conflicts, often forgotten, that are causing so much bloodshed and destruction in several of her nations,” and increasing numbers of Africans fall prey to hunger, poverty and disease, the pope said in the message broadcast from St. Peter’s Square to millions of people worldwide.

He said when he visits the Holy Land May 8-15 he will “emphatically repeat the same message” of reconciliation and peace he brought to Africa during his March 17-23 visit to Cameroon and Angola.

While reconciliation is difficult, he said, it is an indispensable “precondition for a future of overall security and peaceful coexistence and it can only be achieved through renewed, persevering and sincere efforts to resolve the Israeli-Palestinian conflict.”

Pope Benedict read his message and gave his solemn blessing after celebrating Easter morning Mass in St. Peter’s Square, which Vatican Radio said was attended by about 100,000 people.

A sea of flowering trees and shrubs, and other colorful blooms, donated by companies in the Netherlands, decorated the steps and central balcony of St. Peter’s Basilica.

The pope, who turns 82 April 16, tripped without further incident when he climbed the dais where the papal throne sat in the central balcony.

He offered Easter greetings in 63 different languages and gave special encouragement to those struck by the April 6 earthquake and string of aftershocks in Italy’s L’Aquila province.

During the April 11 Easter Vigil, Pope Benedict baptized and confirmed one woman and two men from Italy, a woman from China and Heidi Sierras, a 29-year-old mother of four from St. Joseph Church in Modesto, Calif.

The pope used a small golden shell to pour the holy water over each catechumen’s head. The newly baptized, wearing laced white shawls, had a brief personal exchange with the pope when they brought the offertory gifts to the altar.

During the evening ceremony in St. Peter’s Basilica, the pope asked that the fragile flame and delicate light of God’s word and his love, which God has lit in every Christian, may not be snuffed out “amid the confusions of this age … but will become ever stronger and brighter, so that we, with him, can be the people of the day, bright stars lighting up our time.”

The next morning, after celebrating the Easter Mass, the pope urged Christians to spread the hope the world so desperately needs.

“At a time of world food shortage, of financial turmoil, of old and new forms of poverty, of disturbing climate change, of violence and deprivation which force many to leave their homelands in search of a less precarious form of existence, of the ever present threat of terrorism (and) of growing fears over the future, it is urgent to rediscover grounds for hope,” he said in his Easter message.

Christ’s resurrection “is neither a myth nor a dream, it is not a vision or a utopia, it is not a fairy tale, but is a singular and unrepeatable event” that brings light to the dark regions of the world, he said.

The “sense of emptiness, which tends to intoxicate humanity, has been overcome by the light and the hope that emanate from the Resurrection,” he said.

But while the resurrected Christ vanquished death, “there still remain very many, in fact, too many signs of its former dominion,” said the pope.

Christ wants today’s men and women to help him “affirm his victory using his own weapons: the weapons of justice and truth, mercy, forgiveness and love” and spread the kind of hope that inspires courage to do good even when it costs dearly, he said.

The earthquake in central Italy was never far from the pope’s mind during Holy Week and Easter services.

At the end of the candlelit Way of the Cross at Rome’s Colosseum April 10, Pope Benedict again asked for prayers for those affected by the earthquake.

“Let us pray that in this dark night, the star of hope – the light of the risen Lord – will appear also to them,” he said.

The meditations for the rite were written by Indian Archbishop Thomas Menamparampil of Guwahati and focused on the way Jesus confronted violence and adversity with serenity and strength, and sought to prompt a change of heart through nonviolent persuasion.

Under an awning on a hill overlooking the Colosseum, the pope knelt through the entire service while women and men from Italy and India, as well as two Franciscan friars from the Holy Land, were among those who carried the black wooden cross.

After the 14th station, Cardinal Agostino Vallini, the papal vicar for Rome, handed the cross to the pope who stood and held it aloft.

“We have relived the tragic event of a man unique in the history of all times, who changed the world not by killing others but by letting himself be killed as he hung from a cross,” Pope Benedict said at the end of the ceremony.

Reciting the “Regina Coeli” prayer with hundreds of visitors gathered in the courtyard of the villa April 13, the pope said Christians rejoice because “the resurrection of the Lord assures us that, despite all the dark moments in history, the divine plan of salvation certainly will be fulfilled. This is why Easter really is our hope.”

“We who have risen with Christ through baptism must now follow him faithfully with holiness of life, walking toward the eternal Easter, sustained by the awareness that the difficulties, struggles, trials and sufferings of our existence – including death – can no longer separate us from him and his love,” the pope said.

Contributing to this story was Cindy Wooden at the Vatican.

Editor’s Note: The text of the pope’s Easter message in English can be found online at:

The English text of the pope’s homily Easter morning can be found online at:
https://www.vatican.va/holy_father/benedict_xvi/homilies/2009/documents/hf_ben-xvi_hom_20090412_pasqua_en.html.

The English text of the pope’s Easter Vigil homily can be found online at: