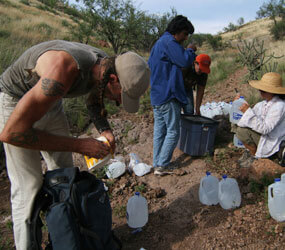 She and her 10-year-old brother, both from El Salvador, joined a group led by a paid guide, known as a coyote, with hopes of meeting up with their mother, who lived in California. Along the way, Josseline fell ill and the group left her behind.

Her brother wanted to stay with her, but Josseline told him he needed to keep going. He needed to make it to see his mother, she told him. Josseline said she’d be all right – she was his big sister, after all.

Josseline died in the desert alone.

Her body lay in a river basin for three months until Dan Millis, a volunteer with the humanitarian group No More Deaths, stumbled across it. Millis was hiking through the rough desert with three other volunteers leaving water for illegal immigrants.

“We were doing a regular supply job,” he said. The group, which searches for migrants in need of medical assistance, also leaves behind food, water and socks at designated locations along migrant trails. Each item is dated and the group tracks the locations. If they come across a bottle of water later, while picking up trash at another drop-off point, they get a sense of the routes migrant are taking.

Two days after Millis found Josseline’s body, federal law enforcement officials ticketed him for littering after he left supplies behind on the Buenos Aires National Wildlife Refuge on the U.S.-Mexico border. Refuge officials enforce a strict no-littering policy in respect for wildlife and the environment.

Millis is sympathetic to the refuge’s environmental concerns. He and other No More Deaths volunteers pick up a lot of trash while on patrols.

“We’re obviously not going to be deterred by these bogus littering tickets,” he said. “The biggest threat to human life out in the desert is lack of water, so we continue to put it out in the desert.”

Millis was tried and convicted but not sentenced. The group is appealing the case.

“We thought it was an anomaly,” Millis told The Catholic Sun, newspaper of the Phoenix Diocese.

But it wasn’t. On Dec. 4, 2008, No More Deaths volunteer Walt Staton received an identical citation while on the refuge. A 12-member jury convicted Staton in June.

Defying Staton’s conviction, 13 humanitarians from No More Deaths, Tucson Samaritans and Humane Borders went out to the wildlife refuge to leave behind water jugs for migrants. All 13, including Franciscan Father Jerome Zawada, received littering tickets.

The Tucson 13, Father Zawada said, told officials of their intention before arriving at the refuge. Federal officials were waiting for them when they arrived.

“We put the water down and were walking away,” the Franciscan priest said. “They asked us if we were going to pick it up. We told them we weren’t. So they wrote us tickets and put the water jugs in the back of their trucks as evidence.”

Father Zawada, who is looking into establishing a Franciscan community in Tucson to serve migrants, said people are crossing the border “seeking survival for themselves and for their families.”

While the number of migrant deaths in the desert has decreased since 2007, the number of deaths this year, 206 according to some estimates, is a drastic increase from last year’s 183 – with Josseline among them.

What makes the increase even more tragic, according to No More Deaths volunteers, is that the number of migrants crossing has actually decreased.

“Without any kind of actual legal path for people to come into the country – without any reform – it pushes people to more and more treacherous terrain,” said Jeffrey Boyce of No More Deaths.

Volunteers have noticed migrant trails moving farther into the mountains. When people get lost, Boyce said, they’re not found in time.

The U.S. Border Patrol has moved the migrant flow into more remote areas to help enforce immigration laws, according to Agent Mark Qualia.

Days after the Tucson 13 were arraigned on littering charges, a group of young adult volunteers mapped out their patrols.

Veronica Rayas, assistant director of the Tepeyac Institute in the El Paso Diocese, joined Laura Ilardo and Christopher Martinez of Phoenix. Daniel Nelson, a volunteer from California who had spent the summer in the desert, led the crew.

“You see people out here, they’re not ready for this,” Nelson said. “That’s why they die.”

Some migrants, believing they’ll arrive at the pickup point in a few hours, pack a change of clothes – oftentimes their Sunday best. Women will often pack high heels, Nelson said. Most of these items are left behind in the desert.

The journey can be days long, depending on where the group of migrants is to be picked up. The closer the pickup, the more likely Border Patrol agents will intercept them. But the farther they have to walk, the more dangerous it becomes.

Migrants simply can’t carry enough water for the journey. This summer, No More Deaths in Phoenix brought some 10,000 gallons to Tucson for the border effort.