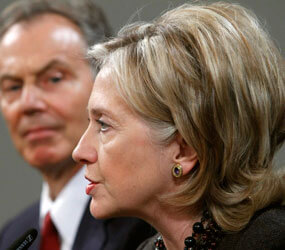 WASHINGTON – While much of Washington focused on health care legislation, the annual release of the State Department’s country reports on human rights practices was largely out of the limelight this year, though the massive electronic document – more than 2 million words – helps shape U.S. policy approaches to the world.

Vulnerable populations affected by wars and internal conflicts in places including Afghanistan, Sri Lanka, Somalia, Congo and Sudan were among the major concerns highlighted in the report’s introduction and at its March 11 release in remarks by Michael H. Posner, assistant secretary in the Bureau of Democracy, Human Rights and Labor.

“We live in a world of conflict,” Posner said, with more than 30 wars and internal conflicts fueled by ethnic, racial and religious tensions, which disproportionately affect women, children, people with disabilities and refugees.

He singled out China, Iran, Nigeria and Cuba as countries with notably deteriorating human rights situations in 2009. Egypt, Russia and Sri Lanka were cited for what he called misuse of national security legislation to broadly curtail basic civil rights.

Other nations with generally good human rights were flagged for enacting or considering official government policies that affect vulnerable groups. Posner included Uganda’s proposed death penalty for homosexuals, discrimination against Muslims in various countries in Europe and sanctions against the Roma in Italy, Hungary, Romania, Slovakia and the Czech Republic.

Posner gave credit to “positive trends” in Liberia, where a truth and reconciliation report and the prosecution of former President Charles Taylor are helping heal a country torn by a long civil war. He also pointed to Georgia’s new criminal procedures, Ukraine’s commission on anticorruption, Bhutan’s transition from a monarchy to a constitutional elected government and the first multiparty parliamentary election in the Maldives.

This year, along with the detailed summaries about whose rights were being abused how, Secretary of State Hillary Clinton promised the State Department would for the first time later this year present an internal report of how the U.S. stacks up against the human rights standard to which it holds other countries.

“Human rights are universal, but their experience is local,” Clinton said at the press conference. “This is why we are committed to holding everyone to the same standard, including ourselves.”

She said the U.S. would participate in the U.N. Human Rights Council’s universal periodic review process.

“In the fall, we will present a report, based on the input of citizens and NGOs, gathered online and in face-to-face meetings across the country attended by senior government officials,” Clinton said. “Assessing opportunities for progress and soliciting citizen engagement is one way that we demonstrate our commitment in word and deed to the basic principles that guide us toward a more perfect union and a more peaceful world.”

One issue that review may touch on is the death penalty, raised by the United Kingdom as a problem in the annual international human rights report of its Foreign Office, released March 17.

The U.K. report was less broad in scope than its U.S. counterpart, looking first at specific issues and how they play out in various nations, then focusing in depth on two dozen countries of concern.

With the death penalty, the Foreign Office said the British government raises concerns directly with the government of the United States, along with China and Jamaica, as well as intervening in individual pending execution cases in the U.S. Japan, Iran and China.

On a related subject, also obscured in the news amid the focus on health care were observances of the 30th anniversary of the Refugee Protection Act, which is intended in part to help care for the people whose basic rights are abused in their own countries.

Organizations that have long helped resettle the inflow of refugees, including the U.S. Conference of Catholic Bishops and Lutheran Immigration and Refugee Services, marked the anniversary with reminders of the importance of providing safe havens for people who escape rights abuses, wars and natural disasters.

“The 1980 Refugee Act reinforced the U.S.’ commitment to those fleeing persecution by offering them an opportunity to start their lives anew,” said a statement from Bishop John C. Wester of Salt Lake City, chairman of the USCCB Committee on Migration. Prior to enactment of the 1980 law, refugees were granted a safe haven, but there was no systematic admissions policy or coordination of services, he noted. The law established standards for admission and resettlement and conferred benefits and status on refugees.

Anastasia Brown, director of resettlement services for Migration and Refugee Services of the USCCB, noted that “there remain millions of refugees who live in danger and deserve stronger protection.”

That bill would provide for the regular update of the dollar amount granted to refugees as they resettle in the United States. It would help families that have been separated to reunite in one household and also would make changes in the immigrant detention system.

Those changes include providing detention alternatives and requiring that migrants have access to legal counsel, medical care, religious practices and family visits.

The bill also would eliminate the one-year waiting period for refugees and asylum seekers to be able to apply for green cards, granting permanent legal residency, and would clarify a “material support” provisions that have made it difficult for many applicants to receive refugee status or asylum. Anti-terrorism measures have had the effect of excluding from asylum or refugee admission people who have provided even very tangential or coerced support to designated terrorist groups.

At congressional hearings since the passage of the USA Patriot Act and Real ID Act, witnesses from church agencies noted that the broadly defined “material support” bar has kept people from resettling safely in the United States for providing, even involuntarily, any kind of financial, physical or material assistance to a wide range of organizations. They include any group that has engaged in armed resistance to a government, including pro-democracy organizations.