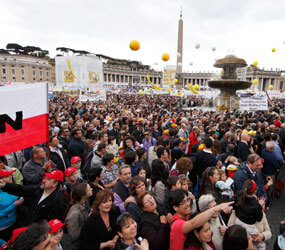 Thanking the crowd for their presence and affection May 16, Pope Benedict said, “The true enemy to fear is sin, the spiritual evil that unfortunately sometimes infects even members of the church.”

“We Christians are not afraid of the world, even if we have to be careful of its seductions. Rather we must fear sin and, for that reason, be strongly rooted in God and solid in goodness, love and service,” he said at his weekly Sunday blessing.

With trust in the Lord and a renewed commitment to following him, he said, the church can become holier by going through “the trials” it is facing.

The Italian National Consultation of Lay Groups, a Catholic organization, spearheaded the effort to bring Catholics to the square to join the pope and show their support. A variety of Catholic organizations and movements, labor unions and political groups joined them, filling St. Peter’s Square and spilling onto the adjacent streets.

Paola Dal Toso, secretary of the national consultation, told Vatican Radio that participants wanted to pray for the victims of sexual abuse, but also “to recall all the good that many priests do, which does not make the news.”

Cardinal Angelo Bagnasco of Genoa, president of the Italian bishops’ conference, led the crowd in prayer before the pope arrived at his studio window to address the gathering.

“Almighty and eternal God, comfort of the afflicted and support of the troubled, hear the cry of those who are in pain so that they would find justice and comfort,” the cardinal prayed.

He also prayed that the abuse victims would return to participating in the life of a “purified” church, so that they could “rediscover the infinite love of Christ.”

In a rare exception, Vatican officials allowed the organizers to hang banners from the colonnade surrounding the square; many proclaimed, “Together with the pope.”

“We young people are with you,” “The people of Rome with the pope” and dozens of other signs, banners, balloons and flags expressed love for the pope.

Salvatore Martinez, president of the Italian Renewal in the Holy Spirit movement, told Vatican Radio that Catholics recognize that some people in the church have seriously sinned, “but the church is alive, the church is still standing. The laity and the movements are expressions of it through their vitality, their beauty and through the strength of the witness they give each day.”

Andrea Olivero, president of an Italian Christian workers’ group, told the radio that members of his group appreciated the pope’s bluntness in recognizing that some priests have hurt children and betrayed the trust placed in them.

The abuse scandal, he said, “should be experienced as a cross by all of us. We cannot allow our pastors to be the only ones who live with this suffering, which is a suffering that affects the entire church.”

At the same time, Olivero said, all Catholics must make a renewed commitment to living their faith and to helping the poor, the weak and the hurting.

Pope Benedict also referred to the scandal when he wrote to participants in a large ecumenical gathering in Germany. The ecumenical Kirchentag, which ended May 16, had focused on the theme of hope.

The pope said that at a time when the world’s people are in need of hope, some people are asking if the church really is a place to find it.

“In the past few months, we repeatedly have had to face news that could attempt to remove the joy from the church, news that obscures it as a place of hope,” he said.

Using the words of a Bible parable, the pope said that people may be tempted to ask God whether he sowed the seeds of his Gospel in good earth.

“Weeds exist even in the heart of the church and among those whom the Lord has welcomed into his service in a special way. But the light of God has not set, the good grain has not been suffocated by the seed of evil,” the pope said.

The church continues to be a place of hope, he said, because it is the place where people hear the word of God, “which purifies us and shows us the path of faith.”