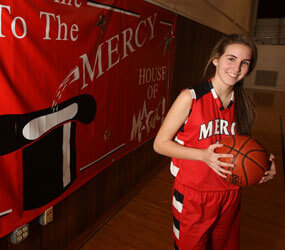 Samantha Hruz is a parishioner of St. Stephen in Bradshaw and plays most of her basketball for an AAU team based in Harford County.

While there are closer options, there was little doubt that she would attend Mercy High School, where she’s captain of the varsity basketball team despite being only a sophomore.

Her mother, Marianne, was one of seven Kelly sisters to attend Mercy. Her grandfather, Mike Kelly, served on the Mercy High Board of Trustees for 21 years, including two stints as its chairman.

“The game” Hruz refers to is the annual off-campus meeting between Mercy and its longtime rival, the Institute of Notre Dame. This year’s feature on the schedule for both teams is set for Feb. 4 at the Towson Center, and figures to carry even more emotion than normal for the Magic.

Mary Ella Marion, Mercy’s veteran coach and athletic director, is on temporary leave, recovering from breast cancer surgery. She commented via e-mail about Hruz’s value to a young team.

“Sam was selected as one of our captains this year,” Marion wrote. “That speaks volumes. She has had to assume more responsibilities, because most of the team is freshman and sophomores.

“What has impressed me is her ability not only to lead through her determined work ethic, but her confidence in encouraging and supporting her teammates with a maturity that goes beyond her age. Sam is a three-sport athlete who brings the same enthusiasm and work ethic to each sport.”

Playing volleyball in the fall and lacrosse in the spring, Hruz is on pace to earn 12 varsity letters. Basketball is her favorite, as she averages 11 points and six rebounds for the Magic. Despite being one of the team’s tallest players, she is a threat on the perimeter, with a solid three-point shot.

Both of her parents contribute to her affinity for basketball. Her mother still holds the career scoring record at the College of Notre Dame of Maryland, 1,580 points. Her father, Mark, is her AAU coach.

“I really want to play basketball in college,” Hruz said.

A “B” student and avid reader, Hruz is a very quick study. In basketball, she enjoys locating the openings in the opposition’s defense. She had never played volleyball before making the Mercy varsity as a freshman.

Wherever she goes on the Mercy campus, she feels at home.

“I like how calm it is here,” Hruz said. “Plus, I don’t have to worry about what I’m going to wear in the morning.”