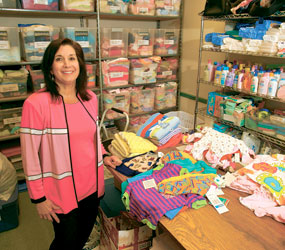 There’s nothing more rewarding for Kim Hartman than visiting a young woman who has chosen to keep her baby rather than have an abortion.

“I’ve had them hug me and thank me for talking with them,” said Hartman, executive director of the Howard County Pregnancy Center. “They say, ‘I was scared and you made me feel much more at ease.’ “

For three decades, that kind of loving outreach has been a hallmark of the Howard County Pregnancy Center. The Columbia-based service celebrated its 30th anniversary with a March 25 reception for its 16 volunteers.

An education component has expanded in recent years to provide parenting, diet, exercise and childbirth classes. The center hopes to provide sonograms for expectant mothers in the near future.

Hartman noted that since January, the center has served 145 clients. Numbers are up because of the struggling economy, she said.

In addition to teenagers, the center attracts college women and even married couples that have fallen into difficult financial situations.

Pat Kelley, a volunteer and former center director, said most expectant mothers fall into the 19-to-24 age group – just as they were when former Lt. Gov. Samuel W. Bogley III helped dedicate the center in 1981 at its original Ellicott City location.

Hartman, the first paid employee in the center’s history, is in the process of converting all the paper records into a computerized database. She said she is grateful for the strong support of area churches and other benefactors who allow the pregnancy center to fulfill its mission.

“Everything we get is by donation,” Hartman said. “We couldn’t do it without them.”