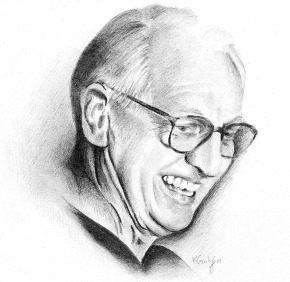 A popular plaque years ago proclaimed, “Any man can be a father. It takes a special man to be a daddy.”

The axiom played on the fact that many men are fathers. Some have little influence on their children, either by absence or by detachment. But one who is called “Dad” or “Daddy” plays a more intimate role in the life of a child.

I had a dad like that. Certainly, Harold Gunty was my father, in fact the father of 11. But he was “Dad.” When the phrase “my old man” was popular in the ‘60s and ‘70s, I never would have called him that; it would have seemed disrespectful.

My siblings share an email list to stay on top of family news. As we are all in our 50s or 60s now, a lot of the messages have to do with health updates and requests for prayers, along with info about who is hosting the next holiday and who will bring what dish.

It’s funny, though, how a lot of email threads wind their way back to bits of our childhood, where dad played a big role.

An email last week about National Doughnut Day brought out the trivia that the shape of the doughnut was created in 1920 by a man who thought of a better way to prevent a doughy center in the delicious gems, thus also creating the doughnut hole. It turns out that several of my sibs recalled that fact from reading Childcraft.

Harold Gunty waits for a parade with his grandson, Tim. (Courtesy Gunty Family)

Dad, a high school math teacher, sold World Book encyclopedias as a sideline. Childcraft was the “How and Why Library,” an illustrated companion set to the multi-volume encyclopedia. My brothers and sisters recounted other tidbits, including poems, from browsing through the books when we were kids.

Of course, that led another sibling to recall the restaurant where Mom and Dad would take us for a special dinner. It was a big deal to take us all out to a sit-down dinner, but what we loved most about the place was the appetizers: every table had bowls of doughnut holes, warm and dusted with powdered sugar.

One sister commented, “Every time I think of doughnut holes, I think of the Branding Iron. And then I think of Mom and Dad. It’s a lovely, warm feeling.”

Another chimed in, recalling that when we were driving home from our grandparents, sometimes we could talk Dad into stopping to pick up doughnuts. She couldn’t recall the name of the place, but in a matter of minutes, others did: Amy Joy.

Harold was a kind and gentle soul, a man of deep Catholic faith and of great integrity. He rarely said a bad word about anyone. In fact, at my dad’s wake, my cousin mentioned that he considered working for a man my father knew. When my dad said simply, “Watch out for that guy,” my cousin knew to stay away. Uncle Harold would not denigrate the man, but that warning was enough.

Dad passed away in 2003, never seeing his beloved Chicago Cubs win the World Series (and having them play in the Series only once in his lifetime). As Father’s Day approaches, I miss him deeply.

When it comes to the difference between a father and a dad, it’s ultimately not about doughnuts, or encyclopedias or teaching us math tricks. It’s about the time he spent with us, and the example he set, how to be gracious, how to be strong – how to be a dad.

Gunty is editor-associate publisher of the Catholic Review.