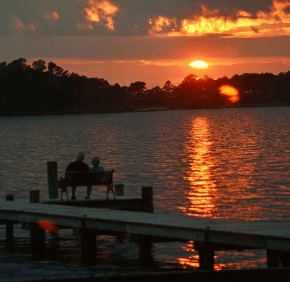 The sun sets on Maryland's Eastern Shore. Catholic leaders in the Archdiocese of Baltimore welcomed Pope Francis' new encyclical on the environment. (Photo by Tom Lorsung/lorsungphotos.com)|

It may not present new church teaching, but Pope Francis’ much-anticipated encyclical – “Laudato Si’: On Care for our Common Home” – has certainly shed new attention on the role of the faithful in promoting sound environmental stewardship, local Catholics say.

In the June 18 teaching document, addressed to all people of good will, the pope presents serious challenges faced by the earth and its population, including pollution, contaminated water, diminishing biodiversity and global inequality, as well as climate change.

The encyclical emphasizes the interconnectedness of the earth, its resources and its inhabitants – the rich, poor, powerful and vulnerable. Pope Francis condemns the exploitation of weaker nations by stronger ones, and notes that the poor bear the brunt of hardships caused by environmental degradation.

“There’s an emphasis on what the pope calls integral ecology,” noted Jesuit Father John J. Conley, Henry J. Knott chair of philosophy and theology at Loyola University Maryland. “We’re very concerned about the environment, but we’re also very concerned about human well-being, and the destiny of the poor.”

The pope states that it makes no sense to advocate for endangered species while ignoring the plight of the poor and exploited, or while “undertaking to destroy another human being deemed unwanted.”

Conversely, the pope adds, “We have only one heart, and the same wretchedness that leads us to mistreat an animal will not be long in showing itself in our relationships with other people.”

Like his chosen name, Pope Francis’s missive venerates St. Francis of Assisi, who according to legend once reconciled a beleaguered village with the man-eating wolf that preyed on its inhabitants, achieving an unheard-of harmony through God’s grace.

“(St. Francis) was a mystic and a pilgrim who lived in simplicity and in wonderful harmony with God, with others, with nature and with himself,” the pope writes. “He shows us just how inseparable the bond is between concern for nature, justice for the poor, commitment to society, and interior peace.”

“On this issue,” the archbishop said in a June 18 statement, “the pope has done what he has done since his election: he has illuminated and made new an age-old teaching of the church, and in doing so begun a new conversation in hopes of advancing the common good.”

“Whether one agrees or not with the scientific consensus on the link between human activity and recent climate change, the Holy Father rightly makes the moral case that the need remains for us to act to protect our environment,” Archbishop Lori continued. “We must resist the ‘throwaway culture’ the pope warns against and seek ways in our daily lives to practice environmentally-friendly behavior.”

Carolyn Woo, CEO and president of Baltimore-based Catholic Relief Services, was a featured speaker during the June 18 unveiling of the encyclical in Rome. Woo, who had served as dean of the University of Notre Dame’s Mendoza College of Business for many years, said Pope Francis is “a forward-thinking business leader” because he shows how important it is to face up to and do something about failures, waste and bad morale.

He asks people “not just to rely on market forces or even on technology” without also being guided by human and moral values that call for a higher standard of protecting and respecting the resources they need and people they serve, she said.

“There will be people who will want to dismiss the pope’s message on a basis of lack of evidence,” she said.

But “for business, which is so big on analytics, it is important that it open its mind and heart to evidence. We could not dismiss this just because we don’t like the message from this evidence” that people have not been treating their common home well, Woo said.

Father Richard T. Lawrence, pastor of St. Vincent de Paul in Baltimore, which is known for endorsing and participating in environmental causes, called the pope’s encyclical “the most important thing he’s done so far.”

“As usual, (Pope) Francis has gotten back to an area of the Gospel that is extremely important, but which we have neglected for a long time,” Father Lawrence continued. “We’ve said the right things on ecology, but we’ve said them quietly.”

“God has given us this wonderful planet, and he has called on us to co-manage it,” Father Lawrence added.

Parishioners from St. Vincent de Paul’s evangelization committee were to meet the evening of June 18 to discuss the encyclical and its implications. Father Lawrence said his church would be hosting a three-seminar symposium over several weeks in the fall to explore the science, theology and policy implications of the pope’s directives.

In recent years and months, the Archdiocese of Baltimore has taken steps toward the “care of our common home.”

Resurrection-St. Paul School in Ellicott City and School of the Incarnation in Gambrills have just been named Maryland Green Schools, a designation awarded by the Maryland Association for Environmental and Outdoor Education to institutions that follow and advocate for environmentally sound practices. St. Mary’s Elementary School in Annapolis and Notre Dame Preparatory School in Towson were re-certified.

In April, the Catholic Review reported on The Seton Keough High School’s recent environmental efforts, including the installation of energy-efficient lighting and partnering with the community to make use of a modern artificial-turf playing field.

Seton Keough was also to benefit from a recently signed power-purchase agreement involving a 4-megawatt solar array to be built on an archdiocesan-owned farm in the Sykesville area, which would provide enough energy to power three high schools, two cathedrals, four elementary schools, a retreat center and the Catholic Center in Baltimore, archdiocesan headquarters.

Sarah’s Hope, an emergency shelter for women and children on Mount Street in Baltimore, near the area hit hardest by unrest following the death of Freddie Gray Jr., has plans to transform 1,400 square feet of asphalt into green space and plant 16 trees in an initiative to address both environmental and quality-of-life concerns in one of the city’s poorest neighborhoods. The shelter – which is operated by St. Vincent de Paul of Baltimore, a poverty-relief organization separate from the parish of the same name – has partnered with the Parks and People Foundation and has received a $75,000 grant from the Chesapeake Bay Trust to complete the work.

Many have opined that “Laudato Si’” – Italian for “Praised Be” – presents a challenge to the political right, as it accepts human responsibility for climate change.

Father Conley said that the encyclical – which he noted rejects the movement to “divinize the planet” or control human population – presents challenges to both sides.

The plea for environmental stewardship is front and center, Father Conley said, “but (Pope Francis) says on the other hand that we shouldn’t deny human beings and their unique value.”