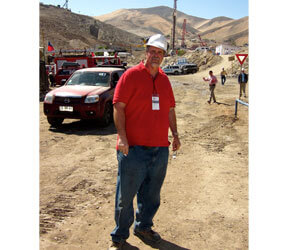 HOUSTON – Greg Hall was preparing to serve as an acolyte for Mass at Christ the Redeemer Church when an associate contacted him about a “banging on the pipe.”

It was Day 17 after the Chilean mine collapsed on 33 miners. A representative from Drillers Supply International – a company owned by Hall and his wife, Angelica – was updating the deacon-in-training on the task assigned to the company’s crew: drilling through more than 2,000 feet of rock down into the gold and copper mine.

“At that time, we thought we were just drilling to try to get a video feed to let (the miners’) families know they had perished,” Greg Hall said. “Then we found out that all 33 of them were alive.”

Moments after serving at Mass in Houston, Hall headed for the airport and left for the San Jose mine in the Atacama Desert.

Days after the drilling was completed, all of the miners were methodically extracted from the mine Oct. 13.

“I talked to a lot of people, and this was the most challenging drill I have done in 25 years,” Hall, now back home, told the Texas Catholic Herald, newspaper of the Galveston-Houston Archdiocese. “Talking to my peers, it was the most technologically challenging hole they ever heard of.”

“I firmly believe God drilled that hole,” he said.

Once Hall arrived in Chile, the Chilean government had requested he devise an alternate plan to get the miners out. Initial rescue efforts proved unsuccessful, including the miners trying and failing to escape through a ventilation shaft.

“I just took what resources were available in the country to draw from very quickly, went through a series of scenarios, and came up what was known as ‘Plan B,’“ Hall said. “They had asked me not to publish the information at that time because no one wanted to get any hopes up because people didn’t believe we could do it. In fact, maybe I didn’t believe we could do it.”

Once Plan B was put into motion, the Drillers Supply International crew had gotten down almost 1,969 feet when the drilling rig came to a halt with just 131 more feet to go.

“The tool was hopelessly stuck, and I was totally out of answers,” Hall recalled. “And if we didn’t come up with an answer, we were finished, we were going to start over again or (the Chilean government) would just consider Plan B a failure.”

It was at that critical moment when Hall realized he wasn’t powerless after all.

“I could pray, and I started praying very hard,” he said. “Soon after that, we started getting a little leeway and (the drill) started moving again.”

Hall had to keep his emotions in check during the drilling operation.

“Those are our brothers that were down there,” he said. “But I was afraid if I acted emotionally, that I might make a mistake that could cost those people their lives.”

In Chile, the tall Texan (6-foot-7-inches) proved to be a man of action not complacent to stand on the sidelines. And at his home parish, Hall’s pastor said the third-degree Knight of Columbus is a great man of faith, not one to stay in the pews either.

“What we have known for years at Christ the Redeemer, the world is now coming to know – and that is, if you need help, Greg Hall is the man to call,” Father Sean Horrigan said. “It’s a great testament to Greg’s dedication to serve others that he and his team were able to contribute to the work of so many in Chile.”

“He has a true ‘servant’s heart’ and gives of his time and talent in a variety of ministries,” the priest said, praising Hall, his wife and the couple’s three grown children “for their generosity of spirit and faith-filled lives.”

Father Horrigan added that Hall is going to “make a great deacon as he loves to serve the community. He truly lives the life of a good steward, returning his gifts to God and the church. He gives public witness to being a man of faith living to serve the greater good.”