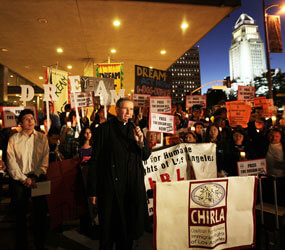 WASHINGTON – With a vote of 59 to 40, the Senate Dec. 9 kept alive hopes for passing the DREAM Act by tabling the long-sought bill that would give potentially millions of students who are in the country illegally the chance to go to college or join the military and legalize their status.

A day earlier, the House passed its version of the bill in a vote of 216 to 198 and the Senate was set to take up its somewhat different version on Dec. 9. Instead it was likely come up again for a vote the week of Dec. 12. Supporters were optimistic that by delaying the vote until the final days of the lame-duck session of Congress, the Development, Relief and Education for Alien Minors Act would have a chance of passage in the Senate.

Senate Republicans have vowed to not pass any other legislation until bills on tax cuts and funding government operations are addressed. The DREAM Act would have been subject to a filibuster, essentially blocking its passage. Instead, Senate Majority Leader Harry Reid moved to table his own bill, rather than risk its failure.

Kevin Appleby, director of migration policy for Migration and Refugee Services of the U.S. Conference of Catholic Bishops, was among those voicing optimism that the DREAM Act can pass in the Senate.

“With passage in the House, we have new momentum,” he said. “We need to keep pushing. Hopefully the Senate will follow the wisdom of the House by passing DREAM before Christmas.”

The delay meant the forces that had been lobbying furiously in the past few weeks were going back to their telephones, computers and fax machines, urging senators who are on the fence to vote for the bill when it comes back after consideration of the finance-related legislation. At least some of the students who had been on a hunger strike until the DREAM Act passes broke their fast with the House passage of the bill.

In a teleconference Dec. 9, Carlos Saavedra of the United We Dream Network said the Texas students who had been fasting for 30 days celebrated the vote by ending their liquids-only fast.

Also in the teleconference, Appleby noted that the legislation enjoyed broad support from the military, higher education institutions, the faith community and others.

He credited House Speaker Nancy Pelosi for her leadership in bringing to the measure to a vote. Though the DREAM Act has enjoyed broad support for years, it has previously been packaged with other legislation, which made it difficult to get it passed. Current opposition has focused on the notion that the bill was a form of amnesty or that it would somehow cost the nation money.

As Appleby said, however, “this is not an amnesty. These students are not here of their own volition. It’s not a free pass for them.”

The bill would allow people who have been in the United States since at least 2005 and who came to the United States at age 15 or younger, and who graduate from high school or get a GED, to apply for legal residency after they complete two years of college or military service.

The Senate version would grant lawful permanent resident status to eligible people only after at least 10 years, during which they must meet requirements for attending college or serving in the military. It includes lengthy waits for participants to be able to sponsor family members for legal residency – 10 years for spouses or children and 13 years for parents or siblings. Any of those would also have to get into the currently years-long lines for processing.

Recent studies by the Congressional Budget Office and UCLA have predicted the DREAM Act would have netted financial bonuses for the country, such as in the form of higher income for a generation of young people who otherwise would be consigned to low-wage, under-the-table employment or forced to leave the country they consider their home.

Clarissa Martinez of the National Council of La Raza said the success of the bill in the House signals that “the Democrats are serious, the White House is serious” about passing the bill, which has been making the rounds in Congress for nearly 10 years.

She called the House vote historic for the Latino community, particularly because of the diversity of support for it.

She also said support for the DREAM Act is “a no-brainer,” adding that it is in the best interests of the country and the economy.
“We cannot afford to lose another generation of young people who can make a huge difference to our country.”

As one of a series of e-mails from supporters of the DREAM Act put it, “We know that many of these target members agree with the DREAM Act, but feel like they can’t vote for it because of lack of support in their states and/or party politics.”