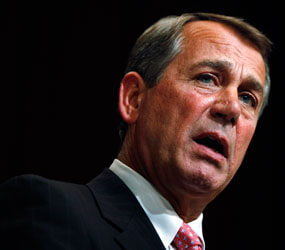 WASHINGTON – More than 70 Catholic scholars and others have challenged Republican House Speaker John Boehner, a product of Catholic schools in his native Ohio, to uphold the church’s teaching on support for the poor.

The group, including about two dozen faculty members from The Catholic University of America, where Boehner was scheduled to deliver the commencement address and receive an honorary degree May 14, said in a letter to the speaker that his voting record varies from the church’s long-standing moral teaching that “those in power are morally obliged to preference the needs of the poor.”

Specifically, the signers pointed to Boehner’s efforts to shepherd a 2012 budget plan through the House that they said “guts long-established protections for the most vulnerable members of society,” particularly pregnant women and children.

They also invited the speaker to join the U.S. bishops and other religious leaders as part of the recently announced Circle of Protection network to protect the most vulnerable Americans from budget cuts.

Michael Steel, Boehner’s spokesman, said in a statement the speaker planned to deliver a “personal, nonpolitical message … that he hopes will speak to all members of the graduating class, regardless of their backgrounds or affiliations.”

Boehner, Steel added, was honored to be invited by the university to speak and was looking forward to receiving the honorary degree.

Stephen Schneck, director of the university’s Institute for Policy Research & Catholic Studies and one of the signers, told Catholic News Service May 12 that the correspondence serves to “call attention to the speaker the church’s teaching on addressing the needs of the poor.”

“We view this as an opportunity to educate the speaker and urge him to take the concerns of the poor much more seriously in his policy efforts,” Schneck said.

The letter was to be accompanied by a copy of the “Compendium of the Social Doctrine of the Church,” he added.

Another signer, Daniel K. Finn, professor of economics and theology at St. John’s University in Collegeville, Minn., said Boehner “seems to be unaware of the implications” of the House vote to pass the proposed budget, which cuts programs such as the Women Infants and Children nutrition program and begins to reshape Medicaid and Medicare.

“It is long-standing Catholic conviction that government has a very important and essential role to play in support of the poor. It’s not an option,” Finn said, citing Pope Pius XI’s 1931 encyclical “Quadragesimo Anno,” which discussed society’s responsibility to the poor and was published in the midst of the Great Depression.

“Quadragesimo Anno” (“In the 40th Year”) marked the 40th anniversary of “Rerum Novarum,” the 1891 encyclical by Pope Leo XIII considered to be the starting point of modern social teaching in the church.

Vincent J. Miller, a professor of religious studies at the University of Dayton, said he signed the letter because he was concerned that many politicians treat the church’s social teaching as if it were negotiable when it’s not.

“It is very difficult to force what (Pope) Benedict XVI described as the ‘truth’ of caritas into policy,” he explained, referring to the pope’s 2009 encyclical “Caritas in Veritate” (“Charity in Truth”).

“But that will never happen if major Catholic public figures such as Speaker Boehner simply ignore it and he is honored without note of the ways in which his policies fall short of the church’s teaching. If we don’t speak up on this, millions of Catholics could be misled to think that these policies are morally acceptable,” he said.

The university responded to the letter with a statement within hours after learning about it, noting that the decision to invite Boehner and grant him an honorary degree was proposed by President John Garvey and approved by the board of trustees.

“We will leave it up to others to debate the merits of those arguments,” the statement said. “Indeed, there are diverse viewpoints on these questions not only within our university but also within the Catholic community in the United States.

“We very much look forward to welcoming Speaker Boehner on Saturday (May 14),” the statement added.