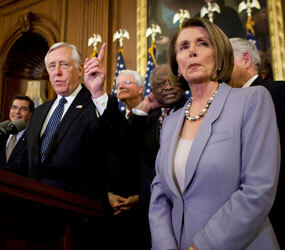 WASHINGTON – The House of Representatives passed historic health reform legislation late March 21 but rejected a last-ditch effort to send a package of legislative fixes back to committee in order to insert language on abortion supported by the U.S. bishops.

The votes were 219-212 in favor of the Senate-passed health reform bill, and 232-199 against a motion by Rep. Dave Camp, R-Mich., to recommit the reconciliation package to committee with instructions to substitute language that would codify the Hyde amendment, which forbids federal funding of most abortions.

The vote on the reconciliation package, which concluded shortly before midnight, was 220-211. Twenty-three Democrats joined all 178 House Republicans in opposing the measure.

There was no immediate comment on the votes from the U.S. Conference of Catholic Bishops, which said in a March 20 letter to the House the Hyde amendment must be included in the final health reform measure. The bishops also had urged enhanced conscience protections.

Sister Carol Keehan, a Daughter of Charity who is president and CEO of the Catholic Health Association, praised the legislation, saying it “represents great progress in the long effort to make health care available and affordable to everyone in the United States.” She urged the Senate to take quick action to pass the reconciliation package.

The House votes came only after Rep. Bart Stupak, D-Mich., obtained a promise from the White House that President Barack Obama would sign an executive order stipulating that the Hyde amendment would apply to the health reform legislation.

The White House has not indicated when Obama will sign the health reform bill or issue the executive order. Unconfirmed news reports said Obama would sign the bill March 23.

Stupak, a Catholic, had led a group of pro-life House Democrats in opposing the Senate health reform bill unless if were amended to include abortion language passed by the House last year. The U.S. bishops had backed those efforts, saying the Senate-passed bill’s abortion language was morally unacceptable because it contained “no relevant provision to prevent the direct use of federal funds for elective abortions.”

Rep. Joseph R. Pitts, R-Pa., said the House language was needed in the Senate measure despite the promised executive order because “an executive order does not trump a statute.”

“The courts will look to the legislative statute to interpret the law,” he said.

In a March 21 memo to congressional staffers, Richard Doerflinger, associate director of the U.S. bishops’ Secretariat for Pro-Life Activities, said that “the statutory mandate construed by the courts would override any executive order or regulation.”

“This is the unanimous view of our legal advisers and of the experts we have consulted on abortion jurisprudence,” he said. “Only a change in the law enacted by Congress, not an executive order, can begin to address this very serious problem in the legislation.”

In introducing his motion to send the bill back to committee, Camp referred to the proposal to codify Hyde in the measure as the “Stupak-Pitts amendment,” but Stupak spoke against it, saying it “purports to be a right -to-life amendment” but was actually an attempt to “politicize life.”

“This is nothing more than an opportunity to continue to deny 32 million Americans health insurance,” Stupak said. “It does not promote life. The executive order ensures that the sanctity of life will be protected.”

The text of the draft executive order released by the White House said its goal was to “establish an adequate enforcement mechanism to ensure that federal funds are not used for abortion services (except in cases of rape or incest, or when the life of the woman would be endangered), consistent with a long-standing federal statutory restriction that is commonly known as the Hyde amendment.”

“The purpose of this executive order is to establish a comprehensive, governmentwide set of policies and procedures to achieve this goal and to make certain that all relevant actors – federal officials, state officials (including insurance regulators) and health care providers – are aware of their responsibilities, new and old.”

White House communications director Dan Pfeiffer said Obama had “said from the start that this health insurance reform should not be the forum to upset long-standing precedent.”

“The health care legislation and this executive order are consistent with this principle,” Pfeiffer added.

The U.S. bishops in their March 20 letter not only called for changes on abortion language but also urged changes that would allow new immigrants to get Medicaid and illegal immigrants to buy health insurance with their own money.

“After a year of divisive political combat, members of the House are told that they can advance health care reform only by adopting the Senate legislation as is, including these fundamental flaws,” the letter said. “The House leadership is ignoring the pleas of pro-life members for essential changes in the legislation. Apparently they will not even try to address the serious problems on abortion funding, conscience protection and fair treatment of immigrants.”