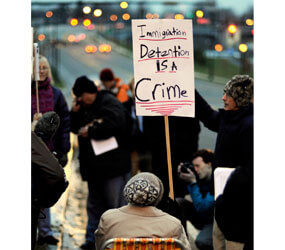 The legislation – called Comprehensive Immigration Reform for America’s Security and Prosperity Act of 2009, or CIR ASAP – was unveiled before a roomful of advocates from churches, community groups and others with interests in fixing the current immigration system.

Rep. Luis Gutierrez, D-Ill., who has shepherded the process of drafting the bill, said the bill would carry the name of Rep. Solomon Ortiz, D-Texas, founder of the Congressional Hispanic Caucus.

Ryan Dwyer, immigration policy adviser for the U.S. Conference of Catholic Bishops, outlined for Catholic News Service some of the differences between the new legislation and previous immigration reform bills:

– No “touchback” provision, which in previous bills would have required undocumented immigrants to return to their home countries to apply for legalization in the U.S.

– The end of a program that gave local law enforcement agencies the authority to enforce federal immigration laws.

– A prohibition on creating a national identification card.