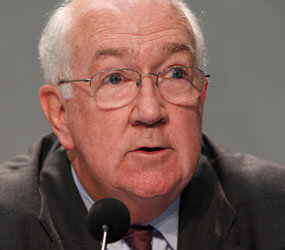 VATICAN CITY – Not only are millions of lives at risk in the Horn of Africa due to hunger and drought, those who escape the famine then risk becoming a lost generation due to a severe lack of stability, education and resources, said a top Vatican official.

“The millions of displaced people on the move now in an effort to survive will tomorrow become refugees, illegal immigrants, without a nation, without a home, work and a community,” said Guinean Cardinal Robert Sarah, president of the Pontifical Council Cor Unum.

“A whole generation risks being lost,” he said during a Vatican news conference Oct. 7.

The only way to guarantee a future after the humanitarian crisis abates, he said, is to create schools where skills, communities and futures are built.

The cardinal launched an appeal for a school to be built in every village. “Where there is an education, there is a possible future, there will be work for tomorrow and families will form,” he said.

The church has a long tradition of education and forming moral consciences, so Catholics should be especially dedicated to this initiative, he said.

Cardinal Sarah led a panel of speakers presenting ideas that came out of a Vatican-sponsored meeting with major Catholic charitable organizations on the situation in the Horn of Africa.

Pope Benedict XVI, who appealed Oct. 5 for increased aid, wanted the meeting so Catholic agencies could review the current situation and look at ways the church is responding to the humanitarian emergency, the cardinal said.

“It’s the first time that Cor Unum has thought of gathering Caritas (agencies) to reflect and respond to the concerns of the Holy Father,” he said.

Cor Unum also invited a representative of the Anglican Archbishop of Canterbury for the meeting.

Cardinal Sarah said the pope had received a letter from Anglican Archbishop Rowan Williams expressing his concern over the situation unfolding in the Horn of Africa. Cor Unum was then contacted “to see what we could do with other Christian communities” and join forces in responding to the crisis, Cardinal Sarah said.

“Faith communities have a distinctive role to play” in addressing crises because they are already a part of the local communities and help with long-term development, which in turn helps communities become more resilient to future catastrophes, Archbishop Williams wrote in a separate message to Cardinal Sarah.

The archbishop wrote that he hoped the meeting would mark the start of “new opportunities for ecumenical collaboration” as well as concrete action that would continue to positively impact vulnerable communities.

According to the United Nations, 13 million people in the Horn of Africa are in urgent need of emergency aid, particularly in Somalia, where thousands of people risk death.

Caritas Internationalis, the Vatican-based confederation of 165 national Catholic charities, has helped 1.1 million people in the region, especially the most vulnerable like the elderly, women, children and the disabled, said Michel Roy, the confederation’s general secretary.

Through its appeal campaign, Caritas Internationalis has raised 31 million euros (about $41.7 million) and was expecting to raise a total of 60 million euros ($80.7 million) to provide emergency food aid, clean water, sanitation, drought-resistant seeds, and develop water conservation systems, he said.

Ken Hackett, outgoing president of the U.S. bishops’ Catholic Relief Services, said the agency’s short-term and long-term projects have made a real difference in people’s lives. Those communities that were helped in past crises are much better off than people in areas Baltimore-based CRS was unable to reach, he said.

“Our contributions, while very significant over the years, are only a small part of what needs to be done” because the scope of problem is so great, added Hackett, a parishioner of the Cathedral of Mary Our Queen in Homeland.

Roy called on the international community to step up donations and help Somalis with nation building since, he said, one of the root causes of the instability and hunger is the lack of a central government.

Bishop Giorgio Bertin of Djibouti, who also is apostolic administrator of Mogadishu, Somalia, said the church must also find ways to collaborate with Muslim organizations that provide aid for those affected by the food crisis.

He also supported the emphasis on building schools, saying Catholic schools “are the best combatants against terrorism” because people from diverse ethnicities, religions, nations and backgrounds come together in Catholic institutions where they learn “to live together and respect one another.”