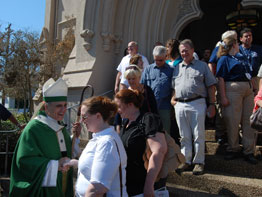 GALVESTON, Texas – An hour prior to Mass, Cardinal Daniel N. DiNardo of Galveston-Houston was walking around the grounds of St. Patrick Church, taking time to speak with those who showed up early for the first Mass on Galveston Island since it was battered by Hurricane Ike Sept. 13.

They all shared similar stories. Some had lost everything. Some had only lost their utilities and were still waiting. Some were born on the island. Some weren’t.

Regardless, they all shared in the hope that the historic island would recover as it has after previous storms, and they all shared the same faith – that Jesus Christ in the Eucharist would lift their spirits during these challenging times.

And like his predecessors – from Bishop Jean Marie Odin to retired Archbishop Joseph A. Fiorenza – Cardinal DiNardo was present to his flock when they needed him most, sharing a smile, a word of hope, or just a simple pat on the back.

“I want the people of Galveston to know that faith is going to be pretty important for them as they begin all of their cleanup and rebuilding and we are here with them,” Cardinal DiNardo said.

This Mass, celebrated Sept. 28, was followed by another Mass at Sacred Heart Church just down the street a few hours later. While the sanctuary of each church was useable, both parishes sustained heavy damage.

“St. Patrick is in relatively good shape. The big problem here is the air condition(ing) is gone,” Cardinal DiNardo told The Texas Catholic Herald, newspaper of the archdiocese. “When you go inside, the church looks very fine. It was one of the reasons I decided to come here to St. Patrick.”

While St. Patrick and Sacred Heart were able to celebrate Mass, the rest of the churches on the island did not fare as well.

Cleaning crews meticulously scrubbed every inch of St. Mary’s Cathedral Basilica, the mother church of the state of Texas, which was inundated with more than 5 feet of water. Archdiocesan officials were finally able to reach St. Therese on Point Bolivar. The church, like most buildings on that part of the island, suffered catastrophic damage.

Regardless, Cardinal DiNardo preached a message of hope, as crews from ServiceMaster, a disaster response company, worked feverishly throughout the week to get St. Patrick Church ready for the Mass.

“We are very pleased with the response from Catholic Mutual Insurance, and our risk manager, too. ServiceMaster as you see is all over. They are working hard and we are working with them and we hope to have the buildings back up and running – including the schools here – as fast as possible,” Cardinal DiNardo said.

The Mass at St. Patrick was concelebrated by a number of priests who currently serve the Catholic faithful on the island.

Franciscan Father John Bok, the pastor, was accosted by members of his flock happy to see a familiar face.

While the church fared well during the storm – it had previously been lifted 5 feet after the great storm of 1900 – Father Bok lost his living quarters during Ike as a result of the storm surge. He is currently residing elsewhere.

Father Bok’s living situation has given him insight on how many of his parishioners are feeling without a place to call home.

“One of the sad things is that is has been difficult to keep track of people because we dispersed all over the place. I don’t know where many of our parishioners were; they probably didn’t know where I was until today,” Father Bok said.

After the Mass, Cardinal DiNardo spent a half-hour shaking hands and offering words of hope to the standing-room-only crowd who attended the Mass.

And as Galvestonians gathered after Mass, neighbors shared hugs and stories. The favorite question was “do you have lights?” This was the first time many had seen each other since Ike.

“Faith” and “hope” were two words being repeated, like the new mantra of those who are going to rebuild their lives on Galveston Island.