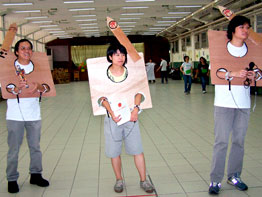 The statement urged the government to improve human rights, allow greater religious freedom in the mainland and honor the promises on human rights and press freedom it made when it applied to host the Aug. 8-24 Olympics.

The statement included a list of people detained as a result of trying to protect local residents’ farms and houses, which Chinese officials took over for construction work relating to the Olympics. It also listed human rights activists such as Hu Jia, sentenced to three years’ imprisonment after being charged with subversion.

It called for the release of imprisoned or missing Catholic priests and bishops, including Bishop Su Zhimin of Baoding, missing since October 1997, and detained Bishops Shi Enxiang of Yixian and Leo Yao Liang of Xiwanzi.

China has been under intense world scrutiny for its human rights record – including its support for the Sudanese government in the Darfur region and its treatment of Tibetan Buddhists.

In late July, the justice and peace commission distributed 6,000 copies of a booklet on China’s human rights record to local parishes and Catholic schools, UCA News reported. The booklet highlighted human rights violations such as evictions due to construction of Olympic facilities and the mistreatment of people petitioning the central government. It highlighted violations of labor rights and press and religious freedoms and noted the use of the death sentence as punishment for some crimes.

Or Yan-yan, project officer for the justice and peace commission, told UCA News more copies may be printed and sent to schools in early September when classes resume after the summer break. That also would coincide with the Paralympic Games, scheduled for Sept. 6-17 in Beijing.

At Hong Kong’s St. Francis of Assisi Church Aug. 2, the commission held a games day with competitions, group sharing and faith reflections. Or said the games were designed to reflect the plight of various groups vulnerable to rights violations by the Chinese government.