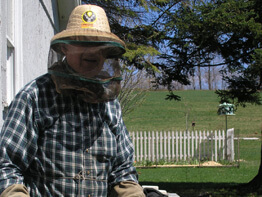 WEST RUTLAND, Vt. – When Father Adam Krempa sits down for a light meal, he enjoys a bowl of cottage cheese drizzled with honey, seeded rye bread lightly toasted with butter not margarine and a cup of coffee with a heaping teaspoon of honey.

“It’s like dying and having lunch with the Lord,” said the pastor of St. Raphael Church in Poultney.

It’s not the toast or even the butter that makes the meal special; it’s the honey.

For 40 years Father Krempa has been keeping bees at his family homestead on Valley View Lane in West Rutland, and the honey they produce and he processes and sells is pure.

He also likes honey drizzled on his cornflakes, oatmeal or Cream of Wheat cereal. “You know you’re living” when you taste the honey, he told The Vermont Catholic Tribune, newspaper of the Burlington Diocese.

Father Krempa has five hives on the south side of his two-car garage, protected from the strong winter winds that sweep across the hillside property. “This is where I find my relaxation,” he said, noting that he often sits in the yard and watches the bees busily flying to and from the hives. “It’s God’s creation.”

He keeps four hives in Florence, mostly for pollination purposes.
“If you ain’t got bees, you ain’t got food,” he said, emphasizing the importance of bees to agriculture.

The bees are important to Vermont agriculture, pollinating crops, gardens and fruit trees. Some beekeepers rent out hives for pollination purposes.
In some areas of the United States, beekeepers are reporting an increasing problem: bee colony collapse disorder, an ailment that in recent months has decimated about 25 percent of the 2.4 million honey bee colonies nationwide, is yet to be documented in northern New England.

Steve Parise, the Vermont bee inspector, said in Vermont “things are generally stable at the moment.”

Production depends on the weather, but on average a Vermont hive produces about 65 pounds of honey a year, Parise noted, adding that the yield can vary 15-20 pounds and sometimes goes as high as more than 100 pounds.
Last year Father Krempa got more than 700 pounds of honey from his hives, keeping some for himself and to give away and selling the rest to individuals and to co-ops. One hive alone yielded about 115 pounds of honey.

He uses no chemicals and is scrupulous about keeping the hives clean, which he said helps maximize production.

In the “honey house” he built, he extricates the honey from the comb, strains it using chiffon nylon and bottles it in glass jars.

“Glass is the purest and the cleanest” container, said the priest, who also makes his own current jelly, current jam, strawberry jam and canned dandelion greens.

Father Krempa waits until September to collect the honey from his hives because at the end of the season “you get all the flavors of the whole summer,” like clover, alfalfa and basswood. Other major honey-producing plants include bramble, goldenrod, milkweed and trefoil.

On a recent spring morning, Father Krempa, dressed in black jeans and a blue, green and white plaid shirt, donned his protective netting hat and canvas gloves to remove a winter covering on one of the hives behind his garage. Bees buzzed around him, but he regarded them with respect rather than fear, even brushing aside a sting on one of his fingers, which he noted proudly are not afflicted with arthritis despite his 76 years.

Moving slowly and cautiously, Father Krempa continued to work as he spoke with a visitor. “These are holy bees,” he said with a laugh, “I’m a priest working with them, and they respect the clergy.”

Father Krempa explained that a hive needs 70-80 pounds of honey for the bees to survive the winter. Each hive has about 80,000-90,000 bees at its peak in the summer.

At one time he had 43 hives which produced more than a ton of honey each season.