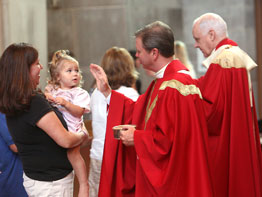 When Susan Scott’s eldest child was born, the mother of five said God spoke to her.

He wanted Mrs. Scott to educate all of her children at home.

“He was trying to put that on my heart,” she said. “I remember thinking, ‘I didn’t go to school to be a teacher. I don’t know how to do this!’”

As the years went on, he kept putting it in front of me and saying this ‘This is what I want you to do.’ He made it pretty clear.”

Mrs. Scott has never regretted responding to that call, she said after a Sept. 11 Mass celebrated by Archbishop Edwin F. O’Brien at the Cathedral of Mary Our Queen, Homeland, for families that homeschool.

Mrs. Scott, a parishioner of St. Ignatius in Hickory, was surrounded by her three youngest, 10-year-old Jack, Aiden, 8, and Gabriel, 6. She relished the opportunity to be among like-minded families.

“You are at home and sometimes you feel isolated, but there’s a whole community out there,” Mrs. Scott said. “God made that to be a community, so it’s very important.”

Home-schooling families used local Web sites and e-mails to promote the Mass by Archbishop O’Brien, filling half of the Cathedral.

“It was definitely a major blessing and grace for us as we start the school year,” said Paula Hoppel, a Havre de Grace resident and one of the promoters of the Mass. “To know that he’s supporting us and cares about us is really special. It touches the hearts of the all home-schoolers I know.”

Archbishop O’Brien exalted the decision to home school in the Catholic tradition.

“Your priority is to form your children in your values, to form them into the image of Jesus Christ,” Archbishop O’Brien said.

Citing the reverence young people had for that day’s Mass, Archbishop O’Brien spoke about the importance of vocations.

Remembering the courage displayed by priests who served as chaplains during the Sept. 11, 2001 terrorist attacks, Archbishop O’Brien said priests were heavily in demand that day and remain so seven years later.

“There are people in need,” he said, “even in our own diocese, to find a parish with a priest.”

He then asked young people in the audience to take on an extra homework assignment: ask the Holy Spirit for direction each day.

“Everyone should pray that prayer every day,” he said. “You can be sure you’ll hear an answer.”