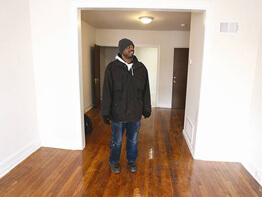 Susan Smith has spent the better part of the past seven years sleeping in abandoned homes, homeless shelters and sometimes in jail.

Keith Norris has been homeless for the past 15 years.

But thanks to Home Connections, a program of St. Vincent de Paul of Baltimore, both longtime Baltimoreans were able to move into their respective new residences March 1.

Sporting a hooded sweatshirt that reads “Jesus Is My Boss,” Mr. Norris said he spent his last night as a homeless man at Baltimore’s Code Blue Shelter in Butcher’s Hill.

He arrived at his new Lower Charles Village apartment by 7 a.m. the next day – more than two hours before movers and Home Connections case workers were scheduled to arrive.

“This is going to be great,” he said, his single blue bag of belongings resting on the shiny hardwood floors of his new living room. “I can’t wait to cook in this new kitchen.”

Once the last piece of furniture was delivered, and everyone was gone, the formerly homeless man said he planned to get down on his knees and cry.

While some may consider Home Connections a radical idea – since it doesn’t require the homeless person to be in a substance abuse program or have any income before they move into a rental unit – the people of St. Vincent de Paul believe it will work.

“For so long, the continuum of care model has placed housing at the end of the continuum so that a client has to engage in services along the way before they are deemed housing ready,” said Kathleen Spain, program director at St. Vincent de Paul’s Beans & Bread Outreach Center in Fells Point. “But, with the ‘housing-first’ model, a person receives immediate access to a home, which means they are no longer homeless.” Together with the supportive services, the client is much more willing to be engaged since most services are offered in the comfort of their own home.”

Laura Gillis, the former president/CEO of Baltimore Homeless Services, initiated the concept and brought the ‘housing-first’ model to the city by partnering with Health Care for the Homeless, Ms. Spain said.

The two non-profit organizations spearheaded a pilot program that housed 25 city homeless people over the course of the last year, and organizers noticed a drastic reduction in the arrest rates of the participants, as well as the number of times they visited city hospital emergency rooms.

Armed with a three-year $366,596 grant from the federal department of Housing and Urban Development and a $142,160 contribution from the city of Baltimore, St. Vincent de Paul developed Home Connections – which officially began last July – and welcomed a staff member furnished by Notre Dame Mission Volunteer-AmeriCorps.

“The program was designed to work with the ‘chronically homeless’, which as defined by HUD is a single person with a documented disability who has been homeless for at least 12 consecutive months or has had four or more episodes over the past three years,” Ms. Spain said.

It’s a small step in addressing the homeless problem in Baltimore, where it’s estimated that 30,000 people in the city will find themselves homeless at one time or another during 2007, said John Schiavone, executive director of St. Vincent de Paul and a parishioner of St. Ursula, Parkville.

Home Connections’ first client was housed in October, 2006 and to date all 16 participants remain in the program.

Though her new apartment was dusty and in need of a good scrubbing, the Catholic-born Ms. Smith likened her new digs to palace fit for royalty.

“Home sweet home,” she sighed as she roamed throughout her new three-room apartment in West Baltimore. “Ah, it feels good.”

Ms. Smith and Mr. Norris are the 15th and 16th people Home Connections has moved into their own housing units. Though their rent and living expenses are paid by the program and furniture provided by the program, the lease and utility bills are in the name of the occupants.

The program mandates that clients must allow Home Connections staff access to their apartment at least once a week and they are the only person allowed to reside at that home.

“In the beginning, the goals are very basic – setting up BGE accounts, applying for mainstream benefits, securing a birth certificate and state identification,” Ms. Spain said. “Long-term goals may include additional education or employment, community integration such as volunteering, connecting to substance-abuse treatment, and managing their personal health.”

Ms. Smith, a 53-year-old mother of two with an extensive arrest record (mostly for trespassing) found herself unable to afford her Northeast Baltimore rental after her husband died of a drug overdose in 2000 and pride prevented her from asking for help.

A 1979 graduate of Woodlawn High School, Mr. Norris, 45, spent seven years in the U.S. Army, moved back to the Baltimore area in 1986 and by 1992 found himself divorced with a crack cocaine addiction, jobless and eventually homeless.

Both Ms. Smith and Mr. Norris admitted to being substance abusers. She is an alcoholic and he is a drug addict.

In the course of each day, both Mr. Norris and Ms. Smith roamed the streets of Baltimore, pan handled, sought free meals at soup kitchens – such as Beans & Bread and Catholic Charities’ Our Daily Bread – and scouted out locations to sleep where they wouldn’t be harmed.

Frequently feeling defeated by their existence, both have found it impossible to find any kind of permanent employment and have not successfully addressed their respective substance-abuse problems.

Now that they have homes of their own, both are eager to resume what they consider a normal life – one not fraught with street survival.

Once he addresses his drug addiction, Mr. Norris would like to go back to school and possibly work for a city philanthropic organization that assists the homeless and substance abusers.

Before she was homeless, Ms. Smith had worked at Catholic Charities’ Franciscan Center in Baltimore and hopes to find work in the future that involves the good deeds of the Catholic Church.

“Right now, it’s like a big old burden’s been lifted off of me,” she said as the movers carried the remaining pieces of new furniture into her apartment. “I don’t have to worry about where to stay tonight. I have my own bed to sleep in.”