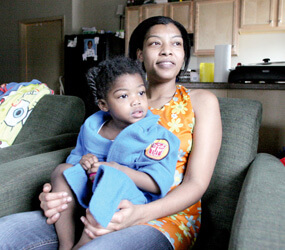 ST. PAUL, Minn. – From the huge windows of her downtown apartment, Mary Smith, 33, can look over the rooftops of St. Paul’s businesses. Her son, 2-year-old Khaliq Hall, can see the trains passing on the tracks to the west, along the Mississippi River.

Six months ago, Ms. Smith and her son were homeless, spending nights on a shelter floor. Today, she has housing and life-building services thanks to the help of CommonBond Communities.

As Minnesota’s largest nonprofit provider of affordable housing, CommonBond has helped thousands of people find homes since it was founded in 1971.

Some of its residents, like Ms. Smith, were previously homeless. Others have suffered foreclosure or have disabilities. Some just need a hand, and CommonBond extends one.

She discovered CommonBond last year through a friend at People Serving People, a Minneapolis homeless shelter where she and Khaliq were staying. She applied for housing, and when she was accepted and given her current place, she was thrilled.

“I could have walked from Minneapolis to St. Paul, I was so excited,” she said, referring to the Twin Cities.

Ms. Smith left her last place in mid-2008 to escape an abusive boyfriend who had once caused her to miscarry a pregnancy and pushed her through a window. She had him arrested, and within 72 hours she left her apartment – where her boyfriend had been living – with nowhere to go.

Ms. Smith didn’t move in with friends or family because they also were going through tough times; an older sister and her four children and grandchild were in a homeless shelter.

She lived in the homeless shelter for three and a half months, but considering the situation she left behind, it was a blessing to her, she said in an interview with The Catholic Spirit, newspaper of the Archdiocese of St. Paul and Minneapolis.

At first, Ms. Smith had to reapply for shelter every week. After she was there a month, she had to reapply every day, waiting in long lines in the welfare office to fill out the paperwork.

She spent her time applying for jobs and taking resume classes, but as time went on, SMs. mith was afraid they would not find a way out of homelessness. She didn’t think she could find housing without a job.

“My nightmare was that we were going to spend Christmas in the shelter,” said Smith, who found temporary housing through Lutheran Social Service.

“Homelessness was right around the corner,” she said.

In November, CommonBond gave Ms. Smith and her son a home. It connected her with Bridging Inc., an organization that provides furniture and kitchen items.

At Christmas she and Khaliq had a tree. In mid-February she got a bed.

Smith has a social worker who connects her to food pantries and other assistance programs, or just listens when Smith needs to talk, she said. She also has a domestic violence advocate and counselor to help her work through her abuse experiences.

CommonBond also helped Ms. Smith find day care for Khaliq, so she can continue to look for work.

Despite the economic recession, Ms. Smith was optimistic and determined to find a job. “I’ve been through a lot of tough times – a recession is nothing,” she said. “To be out in the world again is good.”

She was looking into enrolling in online college courses to earn a degree in social work. She wants to help other women and children, she said.