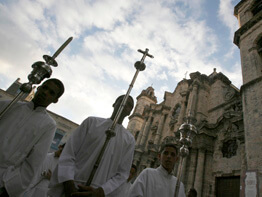 HAVANA – Holy Week in Cuba was marked with processions, a Way of the Cross through the streets of Old Havana and official permission to broadcast radio messages to the faithful.

The celebrations came at a time when relations with the socialist government have been characterized by “a process of greater understanding,” said Auxiliary Bishop Juan de Dios Hernandez Ruiz of Havana.

For the third time in recent years, a Cuban government television channel also broadcast the Good Friday Way of the Cross from Rome, led by Pope Benedict XVI. The April 8 news program aired on all local TV channels showed images of the papal Easter Mass and part of the pope’s Easter message.

“After difficult times, the Cuban government is beginning to understand the role of the church,” Bishop Hernandez told journalists shortly before leading the Way of the Cross on Amargura Street in Old Havana. He was referring to the confrontations between the Catholic Church and the government following the revolution in 1959, when the island’s leaders officially declared Cuba a socialist country.

On April 6, hundreds of people wound through the streets from the Havana cathedral to the Church of Cristo del Buen Viaje (Christ of the Good Journey).

A group carried statues of Jesus and Mary and a huge wooden cross through the streets on their shoulders, while followers sang and prayed. Two announcers with megaphones described each station, while residents watched the procession from the balconies or doorways of their houses.

Catholic processions were prohibited in Cuba from 1961, shortly after President Fidel Castro came to power, until Pope John Paul II’s historic visit to the island in January 1998.

Bishop Hernandez said now was a time “of dialogue” in the country.
“We are in a process of greater understanding. I believe that is positive. It is a journey, and as with any journey we expect that rather than obstacles we will find paths along which we can walk more quickly,” he said. “For Cuba’s Catholic community, this is important. It is a way of normalizing the life of the church. I think we are making progress.”

The bishop said that church-state relations had not changed during the last eight months under the administration of Defense Minister Raul Castro, who has been acting as president since July 31, while his brother, the president, convalesces from intestinal surgery.

“Everything is the same. There are no substantial changes,” Bishop Hernandez said.

In the future, the bishop said, any changes in the country will require “great understanding by the international community and dialogue that will enable us to move ahead in a civilized way.”

He added, “Insofar as possible, we hope that the life of the church and its mission of evangelization normalize, and I think that is also the government’s wish.”

Havana Cardinal Jaime Ortega Alamino said in a late-March interview with the Spanish daily El Pais that at this moment in history Cuba needs “dialogue, not pressure.”

Unlike some other countries in the Western Hemisphere, Cuba does not recognize the days of Holy Week as holidays, and people go to work and school as usual.

“We grew up knowing that Holy Week is a time to go to Mass and that sort of thing, and not a time to go on vacation or take trips outside the city,” Francisco Perez, 40, told Catholic News Service.

One Havana priest, Father Fernando de la Vega, said it was “a disadvantage that the days are not holidays, because we had to hold all the liturgies at night.” However, he noted that many young people participated in the liturgies.

Maria Teresa Quiala, 84, still remembers the day long ago when she received her first Communion in her hometown of Santiago de Cuba. For her, she said, Holy Week is “the most beautiful time there is, because it is a great spiritual help. I keep the traditions. I don’t eat meat, just eggs and fish.”

Thais Gonzalez, who grew up Catholic, said Holy Week was “an incredibly beautiful time, even though we are not all Catholic.”

“We learn a great deal, especially to forgive and to live in the peace that we so need, because there is much confusion in the world, much violence, and many people who are doing the wrong things,” he said.

While awaiting the arrival of the Way of the Cross procession, Gonzalez added: “The Cuban people were always very religious. We have a spirituality from birth. Children must grow up in a climate of peace, harmony and respect for the Ten Commandments.”