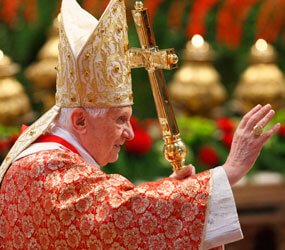 VATICAN CITY – The gift of the Holy Spirit creates the unity and universality of the Catholic Church, overcoming barriers of nationality and language and opening people’s hearts to work with and serve one another, Pope Benedict XVI said.

“The church is, by its nature, one and universal, destined to live among all nations, all peoples and in the most varied social contexts,” the pope said May 23 during his homily at a Mass celebrating the feast of Pentecost.

The gift of the Holy Spirit, poured out on the Apostles on the first Pentecost, continues to be given to Jesus’ disciples, the pope said.

Where there are tensions and misunderstandings, the Spirit “creates unity and understanding,” he said. And in the modern world, when many people see themselves simply as “individuals in competition or in conflict with one another,” the Spirit “opens them to the experience of communion” and helps them form one church, he said.

“Unity is the sign of recognition, the ‘calling card’ of the church,” he said.

The unity of believers is important in parishes and dioceses, Pope Benedict said, but it also is essential that local Catholic communities are in full union with the universal church and its head, the pope.

Pope Benedict also that said the Holy Spirit’s constant movement toward unity is a key tool for determining whether a person or action is truly Christian.

“If a person or a community is closed off in its own way of thinking or acting, it is a sign that it has moved away from the Holy Spirit,” the pope said.

But, he said, the Holy Spirit’s unifying action does not grind away all differences among believers; rather, it values different gifts and helps people place them at the service of the entire church.

“The church is never a prisoner of political, racial and cultural boundaries; it cannot be confused with nations or even federations of nations because its unity is of a different kind and aspires to cross all human frontiers,” he said.

The pope said the church can be a sign and instrument of unity “only if it remains autonomous from every nation and every particular culture.”

While he did not mention specific countries or areas of the world in his Pentecost homily, the pope did offer special prayers for Catholics in China when he recited the “Regina Coeli” prayer after Mass.

Pope Benedict has designated May 24 – the feast of Our Lady, Help of Christians – as a day of prayer for the church in China.

“While the faithful in China are praying for deeper unity among themselves and with the universal church, Catholics – especially those of Chinese origin – around the world are uniting with them in prayer and charity,” the pope said.