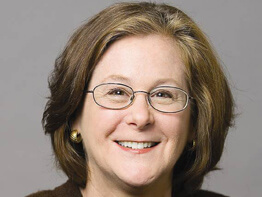 Ms. Tucker, who serves as the Mid-Atlantic regional director for CRS, shares her knowledge of the escalating fall out during a 30-minute program on Comcast Cable Channel 73 in Howard County called “Building Peace for Israelis and Palestinians,” airing throughout February, 11 a.m., 3 and 7 p.m., on Mondays and Fridays.

Ms. Tucker is urging the U.S. government to make diplomacy in the region a priority and is encouraging Baltimoreans to join locally-sponsored pilgrimages to the Holy Land to get a real perspective of the regional strife.

As CRS’s regional director for the Middle East from 1998 to 2003, Ms. Tucker lived in Egypt during that time and traveled in the conflict-ridden borders of Palestine and Israel often enough to witness the devastation among Christians, Jews and Muslims of both nations.

When Ms. Tucker was approached by Producer Bob Krasnansky to be a panel member on the program, her reply was a resounding yes.

“I thought it was a great opportunity to share information about both sides of the conflict,” said Ms. Tucker, sitting in her small downtown Baltimore office decorated with items she purchased during her travels to the Middle East. “I’ve been struck about how difficult it is for people in this country to get information about what is really going on there.”

Americans tend to have a solid grasp on the suffering endured by Israelis and Jews throughout the history of the conflict, but rarely get a sense of the Palestinian struggle during this same period, she said.

“People hear about the suicide bombings, but don’t know about the humanitarian crisis there,” Ms. Tucker said. “The intense poverty, lack of employment and commerce, lack of educational resources and the terrible refugee situation has created a miserable existence for so many Palestinians.”

Much of the problem has been exacerbated by the Israeli-constructed border wall that was built far inside the Palestine boundary, making it impossible for many Palestinians to travel to the employment centers and commerce markets, reeking havoc on the region’s economy, she said.

The wall was constructed to separate Israeli settlements inside Palestine from the rest of the state, Ms. Tucker said.

CRS, the Baltimore-based international humanitarian agency of the Catholic community in the U.S., supports relief efforts in Gaza, the West Bank, northern Israel and Jerusalem.
“We need active U.S. involvement in this area,” Ms. Tucker said. “Our government needs to make this region of the Middle East a priority in its diplomatic efforts and to promote a two-state solution for a secure and free Israel, and a secure and free Palestine.”

Moderated by Ali Zaghab, Ms. Tucker was also joined by on the program by Susan Kerin of the Palestine Children’s Relief Fund based in Alexandria, Va.

Since the Palestine Children’s Relief Fun relies on U.S. families to support the needs of its patients through hosting, transportation and translation, the program gave Ms. Kerin an opportunity to urge people in the Howard County viewing area to get drawn in.

“We are always looking for new volunteers to get involved at the local level,” she said. “In fact, we have a case coming soon to Baltimore and the Howard County broadcast gave us some leads in finding host families.”

After hearing the account of a group of U.S. students who recently made a pilgrimage to the region – but for security reasons had been limited to travel beyond the Israeli portion of the Holy Land – Ms. Tucker said she was distressed when they appeared to be taking the side of the Jews caught up in the conflict.

Though she acknowledges Jews are suffering in the region, she said those travelers’ restricted view had provided only one perspective and hopes future pilgrimages will give followers a broader view of the plight of the other religious groups in the Holy Land.

“When people visit the Holy Land I would encourage them to experience the sites in the whole region, if it’s possible,” Ms. Tucker said. “That way they can understand the spiritual collectiveness the Holy Land has for Christians, Jews and Muslims.”