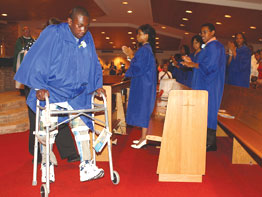 Most moms cry when their child walks across stage to receive a diploma, yet Kim Guy’s tears spilled for the fact that her eighth-grade son was walking at all.

Four years ago, Juwan Guy, 14, a student at Holy Family, Randallstown, woke up one morning paralyzed due to idiopathic transverse myelitis, a syndrome characterized by inflammation of the spinal cord.

Doctors said there was no hope he would walk again. In a March 2007 interview with The Catholic Review, Mrs. Guy said, “That’s what the doctors said, but we serve a higher doctor. He has the final say. God can turn it around at any given time. We already know Juwan will walk again. We just don’t know the day, the time, or the hour.”

“He had been practicing for two years,” said Mrs. Guy, “but that was the first time he walked in public. He’s a very courageous child.”

With cheers and chants from classmates and the rest of the audience, Juwan received a standing ovation as he transferred from wheelchair to walker, moving along fairly quickly to retrieve his diploma, his legs wrapped in full braces, his body covered with a blue graduation gown.

“He looked very strong, courageous, and calm,” said his mother. “It was a special moment, a milestone in his life.”

His doctors now say there is evidence of nerve regeneration and that Juwan should be able to walk again.

“In spite of all the things that have happened,” said Mrs. Guy, “he is still very, very determined to do well in school and focus on walking.”