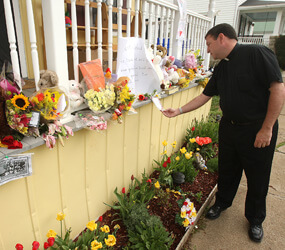 The Holy Family Catholic Community in Middletown is still in a state of deep mourning following a murder-suicide that claimed a parish family of five.

Frederick County police said 34-year-old Christopher A. Wood killed himself with a shotgun after killing his wife, Francie Billotti-Wood, 33, and their three children, Chandler, 5, Gavin, 4, and Fiona, 2. Family members discovered the bodies the morning of April 18.

Mrs. Billotti-Wood’s parents were founding members of Holy Family, the parish she and her family rejoined after relocating late last year from Florida to the small Frederick County town.

After hearing of the deaths, Father J. Kevin Farmer, pastor of Holy Family, was among the first to arrive at the crime scene. The former Baltimore City Fire Department chaplain was up until midnight ministering to the family, emergency response officials and members of the community.
“You’re used to seeing police officers have a strong front and many tried to the best of their ability to keep up that front,” Father Farmer said, “but you can’t help but crumble in the midst of something that horrific and beyond belief.”

In a news conference, Frederick County Sheriff Charles Jenkins called the scene “the worst tragedy I’ve ever been a part of.” He later noted that the victims had cuts on their bodies and had been shot by a small-caliber handgun.

Mrs.Billotti-Wood was very active in the parish, according to Father Farmer. She was a catechist in the religious education and children’s liturgy of the word programs, a nursery volunteer, a Vacation Bible School instructor, a member of the parent advisory committee and a volunteer on the parish events committee.

“She was the kind of parishioner that all pastors would hope for,” Father Farmer said. “Who wouldn’t want someone with that kind of energy and that kind of commitment?”

Father Farmer said he often saw the Wood children in front of their house on Washington Street waving to him and other neighbors. The porch of their home has become a makeshift shrine as members of the community have left flowers, plush toys and notes in their memory.

Father Farmer said parishioners are stunned by the deaths – especially because the Woods seemed like a “normal family.”

“A staff person said to me that they were just like my family, they were like every family,” Father Farmer said. “That’s why this is such a shock.”

Mr. Wood left five suicide notes, one of which indicated he had been taking medication for psychological problems, according to police.

About a month before her murder, Mrs. Billotti-Wood wrote in her blog that her husband was having difficulty adjusting to the move to Frederick County and a new job. He worked as an account manager at CSX Corp. in Baltimore.

“Chris is trying to adjust but he is having a hard time with the new job which makes him more of a major player at work,” she wrote. “More of a mover and a shaker.”

At Masses at Holy Family the weekend of the murders, parishioners prayed for the Wood family.

Father Farmer said it is helpful to think about the questions that were asked at Easter when Catholics renewed their baptismal promises and reaffirmed their belief in God and the promise of eternal salvation.
“We’re really forced to come to terms with what we stated the week before but now really have to believe,” he said.

Members of the archdiocesan crisis response team have been at Holy Family to offer support to the grieving. Kristin Witte, coordinator of pastoral care for the Archdiocese of Baltimore’s Division of Youth and Young Adult ministry, met with Mrs. Billotti-Wood’s second-grade religious education class April 20. It would have been a day she taught the young students.

Ms. Witte brought a prayer cross and guided the class in making a quilt in memory of the family.

“It’s an opportunity to come together to pray and experience community, share their stories about the kind of teacher she was in their lives,” Ms. Witte said. “The hope is that they’ll be able to begin the healing process and look to church as a place where they can find that healing.”

While the students were in class, parents were also given the opportunity to express their emotions in the wake of the tragedy.

Jean Rhoades, Holy Family’s office manager, said the phone has been “ringing off the hook” with calls from people offering their support.

“I think this community is feeling the need to help in some way,” she said.

Auxiliary Bishop Mitchell T. Rozanski, who leads the St. Elizabeth Ann Seton vicariate that includes Frederick County, will attend the funeral Mass for the five parishioners, which will be offered April 24 at the church.

“It’s a time of tragedy when we really need to get to the deep resources of our faith and reach out to one another,” said Bishop Rozanski, adding that he is grateful to Father Farmer for being a consoling presence at the parish.

“What happened in Middletown is just so incomprehensible,” he said.