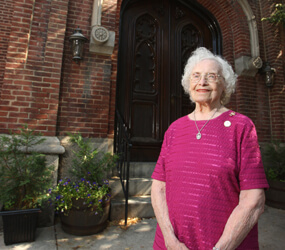 Each time Angie Zepp walks into Holy Cross Church for 8:15 a.m. Sunday Mass, she places her hand in holy water and blesses herself. She then quietly says, “Hello, Jesus.”

She could add, “Hello, old friend.”

Zepp sees her life reflected back in the church.

This is where she was baptized, confirmed and married and received her First Communion. The former Angie Kalusky and her husband, Vincent, raised their six children in the parish.

“This is my parish,” she said. “It means an awful lot to me. I’ll do anything at all for the love of the parish and the love of Jesus.”

On a sunny mid-June afternoon, Zepp sat in Holy Cross’ rectory wearing a red sweater adorned with two pins. One was of an angel and the other recognized her upcoming 90th birthday on July 12.

She intends on celebrating her milestone birthday at Mass. Like each Sunday, she’ll stand at the back of the church greeting people to Holy Cross. She often serves as a lector and extraordinary minister of the Holy Communion in addition to her greeting duties.

Zepp blushed when the parish’s pastor, Father Patrick Carrion of the Catholic Community of South Baltimore, rattled off her contributions.

“Every Sunday that (people) come in, Angie’s the first person they see,” Father Carrion said. “It shows that being a senior; you can still serve the church no matter what age. It’s timeless.”

Zepp looked at the pastor and playfully waved at him.

Her father, a longtime organist at Holy Cross, encouraged Zepp to be active in the Catholic faith.

She still has a photo of her 1934 graduation and vividly remembers that day, as well as her First Communion.

“I love those days,” Zepp said. “I often think back on them.”

She met her husband at the church when she was working at a soda stand. Vincent was making a delivery for Dr. Pepper when the two began to talk. After a few minutes, he mustered the courage to ask her out.

“I guess so,” the former Ms. Kalusky remembered saying. “You have to let me know when.”

Vincent, a Locust Point native, courted her and introduced her to his parents. In 1940, Vincent and Angie were married and a family soon followed.

Some memories have faded, but the birth of each of the couple’s children remains fresh in her mind.

When their children were old enough, they too played a large role in the parish. Some of their daughters were May Queens and the boys were altar servers.

Their children will gather to celebrate Zepp’s 90th birthday. Fifteen years ago, they threw her first-ever birthday party.

“I was so surprised,” she said. “I just couldn’t stop crying.”

Even though she admits to having trouble hearing and occasional leg pains, Zepp organizes and participates in senior trips to local shopping centers.

She says she feels much younger than her age