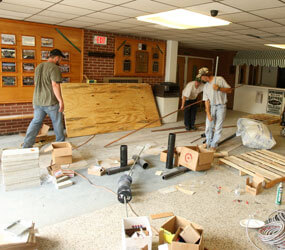 Ten-year-old Andre Dickerson is pumped to be one of the first students at the brand-new Holy Angels Catholic School in Southwest Baltimore.

“It will give everyone a chance to mix with other people,” Andre said. “I’m looking forward to making new friends and meeting caring, loving people.”

M. Kathleen Filippelli, principal of the new coeducational school, said there are currently 125 students registered for grades pre-K through 8 – with more students expected to enroll before the school’s Sept. 7 opening.

Many of the newcomers, including Andre and his younger siblings, Kathryn and Aaron, are former students of the now-closed Father Charles Hall Catholic School in West Baltimore. Others hail from nearby closed Catholic schools including St. Bernardine and St. William of York.

More than 60 of the students are taking advantage of a bus transportation service sponsored through a partnership between the archdiocese and Daniel Schuster, a local business owner. Many will also receive financial aid to help pay the $4,700 tuition.

Located on the campus of Seton Keough High School, Holy Angels will be initially housed on two floors in one of the high school wings. Long-term plans call for a separate building to be erected on the same campus.

Getting Holy Angels ready has been a labor of love, according to Filippelli. Construction crews have been painting classrooms and reorienting a reception area to serve as the school’s main entrance. Workers are preparing to transport desks, textbooks and other items from closed schools to help furnish the new venture.

Students at Holy Angels will have access to Seton Keough’s gymnasium and the track fields at the now-closed Cardinal Gibbons School, Filippelli said.

“Becoming people for others” will be the school’s motto and there will be a strong focus on Christian formation and encouraging volunteerism among the students. Filippelli hopes to start a “Beads of Hope” rosary prayer group so students can pray the traditional Catholic devotion at recess during the Marian months of October and May.

“Our teachers are very committed to the success of this school,” the principal said, noting that Holy Angles will also offer morning- and after-school extended care.

Filippelli, who formerly headed Father Charles Hall, hired more than 20 teachers, specialists and teaching assistants – all of whom came from closed schools.

Although she acknowledged that some parents have been skeptical about the school’s long-term viability, Filippelli said school leaders have worked hard to build a sense of trust. Many parents have dedicated countless hours volunteering promoting and supporting the new school, she said.

“I have no doubt it’s going to be successful,” Filippelli said.

Lafon Dickerson, Andre’s mother, has confidence in the school because she respected the work Filippelli put in at Father Charles Hall.

“I fell in love with her as a principal,” Dickerson said. “She made sure the teachers gave each child individualized attention. I think that’s going to continue at Holy Angels.”

While Dickerson said she and others were heartbroken by the closure of their former schools, she has great hopes for Holy Angels.

Holy Angels Catholic School will hold an open house for new and prospective students and their families Sept. 3 from 10 a.m.-2 p.m.