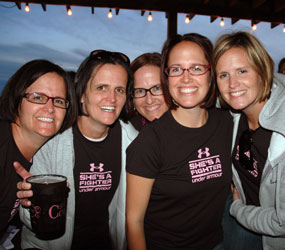 By now, most have seen the pink ribbons, the pink products and promotions and the Baltimore Ravens’ pink cleats.

October has become synonymous with the color pink promoting breast cancer awareness, and the Hoffberger Breast Center at Mercy Medical Center is reaping the benefits of this awareness campaign and the fundraising it occasions.

Oct. 15 was a big day for that fundraising. Both the Tyanna Foundation, which supports breast cancer awareness and research, and the Seton Keough High School field hockey team made separate efforts that day to raise money for the center.

Over the years, the Tyanna Foundation has raised more than $1 million for the center. This year’s Breastfest, now in its 12th year, continued the effort.

O’Brien, along with her four sisters, created the foundation in 1999 in honor of their mother, Tyanna Barre O’Brien, who lost her life to breast cancer nine years earlier at age 48.

The founder said the event tries to target younger people. “You’re not coming to a lecture event,” she explained, adding there are women who have started doing self-examinations because of this and other events held by the foundation to raise awareness in an entertaining way.

Held at the Under Armour Global Headquarters at the Tide Point Promenade, this year’s Breastfest offered three bands and plenty of libations, along with a silent auction.

Breastfest is expected to raise $150,000 this year, and every penny goes to the Hoffberger Center.

That’s because every item for the event is donated. “All the staples in the little neighborhoods down by the water have made donations,” said O’Brien, who explained those donations included food for 1,500 people.

“Imagine being that generous,” said the founder, who learned her volunteer spirit with her sisters from their ever-volunteering mother. “It’s not normal, I say. It’s kind of one of those things we need a little more of in the world.”

To top it off, no one within the Tyanna Foundation is paid. “We have just been able to do everything volunteer, from graphic designer to PR,” O’Brien explained.

While Breastfest is Tyanna Foundation’s flagship event, it is not its only event. “We do events all year long,” said Meghan Friedman, who does marketing for the foundation.

This year, the foundation also lighted the Baltimore City Hall dome pink in conjunction, O’Brien said, with Merritt Properties and with the help of the Baltimore Ravens.

Oct. 10-14 was the foundation’s Sneaker Week, during which individuals donated one dollar a day to wear their sneakers to work.

In the meantime, field hockey players at Seton Keough High School in Baltimore have been making their own effort to raise money for the Hoffberger Center.

Stumme, a former coach for the Seton Keough team for which her daughter Anna plays, said the girls use a pink ball during the game and wear a pink jersey bearing the words, “Keough cares.”

In years past, the team has passed around a pink bucket at the game for donations. Last year, it raffled off a pink iPod, said Stumme.
Last year’s game raised $1,100, she said.

Stumme said this year’s honorary captain on the field was Alexis Baldwin(Jones), an Archbishop Keough alumna, who is also a breast cancer survivor.

The girls also sold headbands this year for at least $10 each. “They talked to people and got somebody to sponsor their headband,” Stumme explained, adding the headbands would be worn at the Oct. 15 game. “The name on the headband is a person who fought, is fighting, or died from breast cancer.”

To help with the effort, the bookstore has been selling black T-shirts printed with a pink ribbon and the words, “Keough cares.” By last Thursday, it had sold 30 to 40 shirts, said Stumme.

As if all this were not enough, “The girls came up with, organized, and obtained permission for (a) bake sale,” Stumme explained. “They raised well over $300 from selling the goods during school lunches three days (last week).”

Stumme said the girls’ dedication to the cause had some of them going home after a game last week and baking for the bake sale.