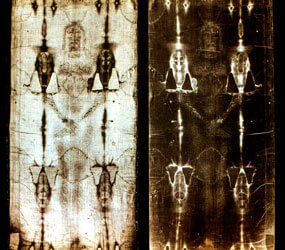 ROME – The Shroud of Turin was hidden in an Italian Benedictine abbey during World War II in part because church authorities feared Adolf Hitler might want to steal it, according to an official at the monastery.

The shroud, which many believe to have been the burial cloth of Christ, was transferred secretly from the Turin cathedral in 1939 to the abbey of Montevergine in southern Italy, and returned to Turin in 1946, after the war had ended.

Officially, the reason later given for the transfer was fear that the cloth could have been damaged if the city of Turin were bombed. But Benedictine Father Andrea Cardin, director of the Montevergine library that holds the relevant documents, said church officials also seemed to fear that the Nazis wanted to take possession of the Shroud.

Already in 1938, church leaders were alarmed when, during a visit by Hitler to Italy, Nazi officials asked unusual and persistent questions about the shroud and its custody, Father Cardin said in an interview published in April by the Italian magazine “Diva e Donna.”

That worried the Vatican as well as the Italian royal family, the Savoys, who at the time were the owners of the shroud, Father Cardin said. Hitler was thought by some to have been obsessed about certain objects related to the life of Christ, including the Holy Grail and the Holy Lance of Longinus.

The Savoy family wanted the Vatican to take the shroud during the war, but Pope Pius XII thought that was not a good idea. Instead, in near total secrecy, the Vatican arranged for the cloth to be brought first to Rome and then to the Montevergine abbey near Avellino, where it was hidden under the main altar.

In 1943, as fighting raged in southern Italy, Nazi soldiers arrived at Montevergine and conducted a thorough search of the abbey premises. The monks withdrew in prayer around the altar, and a Nazi official gave the order not to disturb them.

“In this way, the holy relic was not discovered,” Father Cardin said.

The shroud, which bears the image of an apparently crucified man, goes on display April 10-May 23 in the Turin cathedral, where it is kept permanently. The Italian monarchy was abolished in Italy in 1946, and the shroud was formally given to the Vatican in 1983.