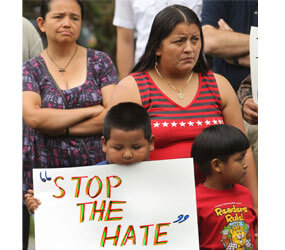 The pastor of the Catholic Community of Fells Point said a rash of crimes against people from the Latino and Hispanic communities, including the murder of a Honduran man in Baltimore City, has led to those concerns.

The person who allegedly committed the beating murder of Martin Reyes reportedly admitted to hating “Mexicans.”

Father Wojtek, who spoke during a news conference condemning the murder of Reyes, said it is not something new.

He said immigrants feel helpless because some lack documentation. Raids by the U.S. Immigration and Customs Enforcement have created a sense of panic locally in Hispanic and Latino communities.

Father Wojtek said: “They’ve been beaten up and sometimes it’s only when they come to the rectory that I’ll be able to say, ‘Have you gone to the police?’ They’ll say, ‘No, no, no!’ They’re afraid. Or they’ll just heal they’re wounds and take care of themselves the best they can.”

The fact that the alleged murderer, Jermaine Holley, 19, reportedly said he hated “Mexicans” while Reyes, 51, was actually from Honduras was not lost on Father Wojtek.
“There’s just such ignorance out there,” he said.

The Archdiocese of Baltimore has made a push for immigration reform. Many parishioners have been living in fear of deportation and some people, priests say, have been sent back to their home countries.

“Until something happens on the national level with immigration laws, these things are going to happen in different places,” Father Wojtek said. “You still have legislators proposing draconian legislation that is only going to fuel this.”

Father Wojtek said those proposed laws should embolden the church to call believers to be compassionate to immigrants.

“Sometimes we have preach to the choir, the people in our pews, that vote for some of these legislators and think this is the right thing to do and just don’t listen to the bishops,” Father Wojtek said. “They don’t understand the teachings of the church.”

“It shows that we have a lot of work to do,” he said. “We have a lot to do to get out the message of the gospel. It is scary that this happens in this day and age, but it is also for us a sign that we really need to preach the gospel and bring the gospel out to everyone.”

He said Catholics must inform themselves about immigration and the Hispanic community.

“I think we really need to open our hearts and our minds and educate ourselves with not just what’s being thrown by secular (media), but by the gospel,” Bishop Rozanski said.