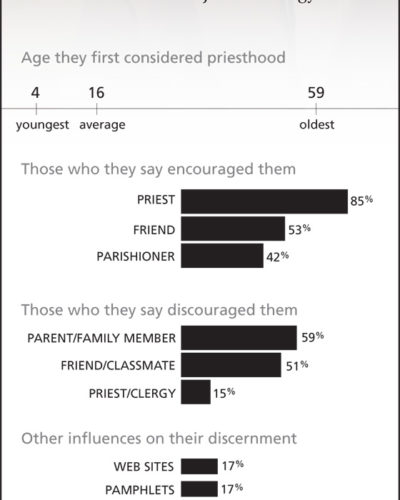 WASHINGTON – Asian-born men make up 11 percent of the ordination class of 2009 even though the number of Asian Catholics in the United States hovers around 3 percent of the total Catholic population, an annual survey of incoming priests has found.

At the same time, men of Hispanic descent make up 12 percent of the country’s ordination class this spring although the percentage of U.S. Hispanic Catholics is estimated at about 34 percent, reported the Center for Applied Research in the Apostolate at Georgetown University in a study for the U.S. Conference of Catholic Bishops.

The survey also reported that 465 men are preparing for ordination this year, a significant increase from the 401 men in the class of 2008.

Nearly 70 percent of the ordinands across the country responded to the survey. The respondents included 239 men being ordained for the diocesan priesthood and 71 for religious orders. Fifteen others did not specify their affiliation.

The study found the average age of ordinands is 36. About 31 percent of them are between 25 and 29 years old. Forty-four percent are in their 30s, the survey reported. Four are in their 60s.

The youngest ordinand responding to the survey was 25 and the oldest was 66.

The study revealed that, at least this year, the number of new priests born outside the United States declined from earlier years. It was reported that 24 percent of ordinands are foreign-born, down from the 31 percent to 32 percent rate of the last two years.

The largest number of foreign-born seminarians came from Vietnam, Mexico, Poland and the Philippines.

About 10 percent of the new priests were not raised Catholic, having joined the church at age 21 on average, the study reported.

The survey revealed that more than six in 10 men completed college before entering the seminary. Nearly one in five of the respondents had earned a graduate degree.

The class of 2009 includes Justin Minh Nguyen of the Diocese of Austin, Texas, a skilled tailor and a refugee from Vietnam. A Filipino refugee, Quy Vo, will be ordained for the Diocese of Albany, N.Y. He reported deciding to be a priest at age 10.

In the Diocese of Brooklyn, N.Y., Robert Mucci spent 25 years as a Wall Street actuary. Elsewhere, Michael Quinn in the Archdiocese of San Francisco served for 20 years in financial management, and James Boccabella of the Washington Archdiocese worked as a certified public accountant for just as long.

Andrew Smith, who worked as a police officer for 10 years in Chicago, will be ordained for the Archdiocese of Chicago.

Other ordinands include a former probation officer, a veterinarian, a doctor, a locomotive engineer and a former executive director of entertainment for the MGM Grand Hotel and Casino in Las Vegas.

“These new priests reflect a tremendous dedication to the church and show great promise,” said Cardinal Sean P. O’Malley, of Boston, chairman of the U.S. bishops’ Committee on Clergy, Consecrated Life and Vocations.

“Those who formed them in the faith both in their families and schools can be proud of their efforts,” he said in an April 20 statement. “The Lord planted the seeds of their vocations, and the surrounding community helped them grow.”

The full study by the Center for Applied Research in the Apostolate is available online at usccb.org/vocations/classof2009.