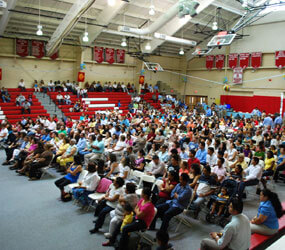 SEVERN – They came to encounter Jesus, receive the blessing of his mother, the Virgin Mary, and to both celebrate and learn about two important aspects of the Catholic faith.

Archbishop Spalding High School was the location for the Second Catholic Encounter, a two-day celebration of the entire Hispanic community of the Archdiocese of Baltimore on Aug. 14-15.

Primarily organized by Father Jesús Aguirre, in residence at Holy Trinity Parish in Glen Burnie, the fledgling event attracted more than 1,200 people for the two days.

With a theme focusing on the importance of the Virgin Mary and the sacrament of the Eucharist, those in attendance were treated to preaching, singing, prayer and Mass. Participants were also given the opportunity for reconciliation.

Rain on the second day did little to bother attendees as they merrily danced, worshipped and shared fellowship. According to Ivette Collazo, having the Hispanic community praise God in unity was one of the driving points of the gathering.

A member of Holy Trinity, Collazo assisted in planning the event, which she said was birthed by Father Aguirre’s desire to evangelize the Hispanic community and bring them closer to a relationship with God. By her account, it seemed to be working.

“The people here are enjoying it, you can tell,” Collazo said. “They are living the experience and getting filled with the Holy Spirit and with what God can do in their lives. They have all been very engaged with what the speakers had to say.”

Guest speakers for the event, Dr. Fernando Casanova, a preacher from Puerto Rico, and Father Teófilo Rodriguez of Panama, delivered messages that underscored the theme of the occasion.

A former Protestant preacher, Dr. Casanova spoke of his own personal experiences that led him to convert to Catholicism.

He recalled his own spiritual journey – including his rejecting the Eucharist as a Protestant – and how reading the Bible led to him becoming enlightened about the faith. This same journey also gave him knowledge of the Virgin Mary’s place in the Catholic Church and the importance of the Eucharist; knowledge that he readily expressed to his listeners.

Father Rodriguez also spoke on the Virgin Mary’s importance in the church, telling the crowd that the event was essentially a celebration of “the triumph of our blessed mother and the church.” Through a translator, Father Rodriguez explained that he wanted his message to be uplifting and positive.

“We live in a world with hardly any hope,” he said. “The message of the church is the Gospel and the word of God. We want to awaken in the people that there’s hope in the resurrected Christ.”

Collazo said ideally they would like to have the event every year, as there is much that the 19 parishes in the archdiocese with Hispanic ministory can learn from one another.

As far as Father Rodriguez was concerned, he hopes everyone there learned how to include Christ in their lives going forward.