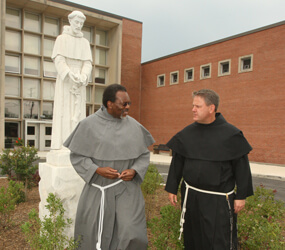 Catholic high schools can’t take their Catholic identity for granted, according to Richard O’Hara, president of The John Carroll School in Bel Air.

“Like anything else, if schools don’t define who they are at their core, they will be defined by others,” O’Hara explained. “I think it’s critical that Catholic schools be very reflective and intentional about what it means to be Catholic. You can’t assume that it’s something that happens automatically.”

For the last several years, John Carroll has been studying ways of strengthening and highlighting its Catholic identity. A Catholic mission committee operates at the school-board level and a subcommittee focused on Catholic mission is a part of the strategic planning committee.

As John Carroll prepares to implement a new master plan, Catholic identity will be central. The school is planning to erect a statue of its namesake, Archbishop John Carroll. It will also build an outdoor grotto in honor of the Blessed Virgin Mary, and plans to relocate its chapel to a more central location in the main school building.

“These are symbolic moves, but they strike at the core of who we are,” said O’Hara, noting that his school has long displayed crucifixes and religious statues inside the building.

At a deeper lever, John Carroll is working to link its Catholic identity more closely to the example of Archbishop Carroll – the first archbishop of Baltimore and an early American proponent of religious freedom. Archbishop Carroll’s vision of Catholicism will be integrated throughout the curriculum, O’Hara said.

“For a long time, when people thought about our school, they thought about a place,” he said. “We are intentionally saying, ‘Hold on. It’s much more than a place. It’s a person who continues to guide us – a scholar, patriot and the highest vision we want to offer our young people so they can be all they can be as scholars, citizens and children of God.”

All students, whether Catholic or not, are required to take theology classes in Catholic high schools. All schools celebrate Masses and offer opportunities for students to receive the sacrament of reconciliation.
Catholic high schools also offer numerous opportunities for students to participate in social outreach projects and pro-life efforts such as the annual March for Life.

“We are spiritual beings as part of the totality of what it means to be human,” Dr. Valenti said. “We have a responsibility to inculcate spirituality in every aspect of what we do. We expect it on the ball field, the basketball court, in the deportment of our students and faculty and in all activities.”

In recent years, many high schools have also begun to implement vocations awareness programs. Bishop Walsh School in Cumberland, for example, has made Tuesdays a special day of prayer for religious vocations. Throughout the year, students also listen to talks on the married, single and religious life. Next year the school is planning to offer students and faculty the chance to “shadow” priests and religious to see what a typical day of their ministry is like.

Conventual Franciscan Father Michael Martin, president of Archbishop Curley High School in Baltimore, said the fundamental reason for the existence of Catholic schools is to spread the Gospel.

“Our principal so often says to our teachers, ‘If we’re not leading kids closer to Christ, then we should shut our doors,'” Father Martin said. “Whether I’m on the cleaning staff or head of the school, I’ve got to continue to ask the Lord what he wants me to do today that’s going to impact the 580 kids in our school so they can be drawn to be more involved in their own faith life.”

It’s difficult to quantify how well Catholic schools succeed in passing on the faith to future generations, Father Martin said. But he pointed to national studies showing that graduates of Catholic high schools tend to be more involved in parish life than graduates of public schools.

“The banner I love is the one in the fitness center that says, ‘I can do all things in Christ who gives me strength,'” Father Martin said. “It’s a reminder that what’s most important here is that Christ gives me strength – not just my body.”

Another visible sign of Catholicism at Curley are the religious habits worn by the Franciscans. Six friars live in the friary, four of whom work full time in the school. The local radio advertisements that Archbishop Curley purchases are always focused on some aspect of faith or the Franciscan mission.

“We have to constantly keep our Catholic identity in front of ourselves,” Father Martin said. “That is the real reason we are here.”