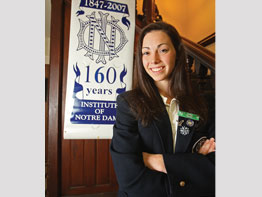 Maria Kroat was a second-grader the last time she saw a “B” on her report card. For the next decade, the parishioner of Our Lady of Hope in Dundalk earned nothing but straight As – making her one of the top students at Our Lady of Hope-St. Luke School in Dundalk and the Institute of Notre Dame in Baltimore.

Maria graduated from IND on May 31, serving as co-valedictorian of her class and a much-respected student leader.

The 17-year-old credits her longtime academic success to being disciplined, working hard and expressing herself creatively through dance.

“I try to do my best even if I’m tired and don’t feel like it,” explained Maria, a member of the National Honor Society, the Spanish Honor Society and one of her school’s “distinctive scholars” for the Archdiocese of Baltimore. Maria also was on IND’s “It’s Academic” team, which competed on a local television quiz show.

“As soon as I start working on something, I get energized and it becomes easier,” she explained. “So much of it is about making it a habit.”

At IND, Maria tutored peers who struggled academically while she studied in the school’s rigorous Theresian Scholar Program. She worked as a counselor for Tamarind, an IND summer program for city youths. She also volunteered in her school’s conflict mediation program, helping settle disagreements between students.

Eschewing television, Maria devotes much of her spare time to dance, an avocation she is considering pursing professionally. Dancing from the time she was 5, Maria has been a member of the Mid-Atlantic Center for the Performing Arts Ensemble Group for several years. She performs ballet, pointe and other forms of dance.

Dance requires a focus that sharpens the mind, Maria said. She also considers it a form of spiritual expression

“Dance is a nice way to express how you are feeling,” said Maria, who admits to accidently kicking more than a few walls when she was younger while practicing at home.

Maria will attend Towson University in the fall and is considering majoring in dance. She will miss her teachers and friends at IND, she said.