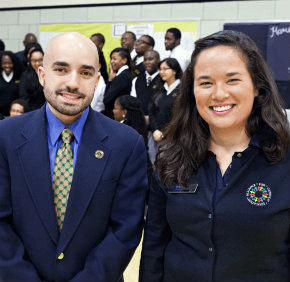 By Paul McMullen
pmcmullen@CatholicReview.org
Twitter @ReviewMcMullen
Having graduated from a high school named for America’s first bishop, The John Carroll School in Bel Air, Emily Lazor has a good grasp of the history of the Archdiocese of Baltimore, the Premier See.
She went on to earn her bachelor’s degree from The Catholic University of America in Washington, D.C., but it wasn’t until she spent two years in the Bible Belt that Lazor truly appreciated her faith’s history here.
She was back in Baltimore Oct. 28, as part of the University of Notre Dame’s “Fighting For Our Children’s Future” national bus tour, which stopped at Cristo Rey Jesuit High School in Fells Point.
Lazor is one of 1,300 graduates of the South Bend, Ind., university’s Alliance for Catholic Education (ACE). Founded in 1993, ACE accepts hundreds of applicants each year for the 90 teaching positions it sponsors in Catholic schools in underserved areas.
To view a slideshow from the event, navigate the arrows below.
See a photo you’re interested in purchasing? Click here.
Lazor spent the last two years at St. Joseph Catholic School in Madison, Miss., teaching Spanish and Theology, and earning a master’s degree in the process. A decade earlier, Notre Dame sent Lee Imbriano there. He’s now the director of campus ministry and chair of the Theology department at Cristo Rey Jesuit.
“The Diocese of Jackson (Miss.) is less than 5 percent Catholic, it was a culture shock,” said Lazor, a parishioner of St. Margaret in Bel Air. “The Catholic schools here had such an impact on me. There’s so much rich heritage here.”
At Cristo Rey Jesuit, senior Kyndall Cunningham and sophomore Jerome Mackall benefit from that history.
The school’s corporate internship program has Mackall working in the archdiocese’s Office of Research and Planning. Cunningham is working at Allegis, a staffing firm. Next year, she wants to study digital communications at Emmanuel College in Boston.
Like Mackall, Cunningham belongs to another faith. Why does she aspire to attend a Catholic college?
“The spiritual aspect to the school (Cristo Rey) unites the faculty and students,” Cunningham said. “It slows things down.”
That setting was made possible by people such as Earl and Darielle Linehan, parishioners of St. Ignatius in Baltimore. Before they were among the first benefactors of Cristo Rey Jesuit, they supplied seed money for ACE, philanthropy that was recognized Oct. 28, when they received Notre Dame’s Sorin Award for Service to Catholic Schools.
Linehan, the president of Woodbrook Capital, was a 1962 graduate of Notre Dame.
After a student assembly, the Linehans and some students got a look at the Notre Dame bus. Baltimore was near the middle of the first of four legs that will take it coast to coast during the 2013-14 school year. The tour began the first weekend of October in Dallas, where the Fighting Irish football team played Arizona State.
Lazor served as a local guide for a Notre Dame ACE contingent headed by its co-founders, Holy Cross Fathers Timothy Scully and Sean McGraw.
She arranged for a Mass and tour at the St. Mary’s Spiritual Center and Historic Site on Paca Street, where St. Elizabeth Ann Seton took her first religious vows, and then a visit to St. Mary’s Seminary and University in Roland Park.
Both were done at the suggestion of Matt Himes, a seminarian whom Lazor met when both were high-school volunteers at the archdiocese’s Camp Glow, which serves adults with development disabilities.
Lazor is now promoting the work of ACE, but plans to return to the classroom and teach high school theology.
“Emily is a perfect example of the kind of person we’re blessed to be able to partner with,” Father Scully said. “High GPA, a leader, faith-filled, committed to the church. She wants to give her life away to join our movement, and she’s going to be a part of it for the rest of her life.”
Also see:
Joint venture in Sparks nourishes thousands
Lennon returns to Baltimore’s Mercy High as its next president
PrevNext