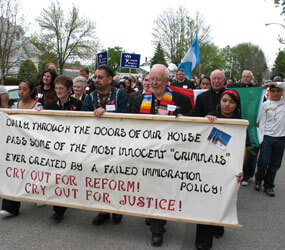 POSTVILLE, Iowa – After the first anniversary observance of the immigration raid in Postville May 12, Archbishop Jerome G. Hanus of Dubuque said he hoped the event would show the world that faith in Christ ended in action.

“We’re hoping to show that we take the words of our Scriptures very seriously,” he said, “to treat the alien in your midst like your brother or sister, and that when you receive the alien, the foreigner, you are welcoming Christ.”

A year to the day federal agents descended on Agriprocessors, the town’s largest employer and biggest industry, and arrested 389 undocumented immigrant workers, people of all faiths and walks of life gathered in solidarity to show support for those most affected by the raid.

More than 650 people attended a day of remembrance at St. Bridget Church. The day’s observance began at 10 a.m., the time the raid began. Bells around the town tolled once for each arrested worker.

It was important, the archbishop said, for the event marking the raid to be both local to Postville and universal in participation.

“We decided the event had to take place here because this is where the event took place and this is where so much of the suffering has happened,” he said in an interview with The Witness, the archdiocesan newspaper.

Many of those arrested already have been deported. Others remain lost in the court systems. And still others are stuck in Postville, jobless and heartbroken.

Organized by Sister Mary McCauley, a Sister of Charity of the Blessed Virgin Mary who is the retired pastoral administrator of St. Bridget, and the Rev. Stephen Brackett, pastor of St. Paul Lutheran Church in Postville, the anniversary event was held as a way to pray for and raise awareness of the ongoing plight of the arrested workers’ and their families.

Rev. Brackett said the event was as much a way to reach out to those still living in Postville as to those who had been taken away after the raids.

“In the worship service we wanted to tell the story of why immigrants come here, what they experience trying to get here and what happens to them while they’re here,” he said. “We also wanted to answer what we do as people of God to respond to their plight.”

According to Rev. Brackett, a number of complications have prolonged the suffering of the immigrants in the Postville community.

He said that the community was expecting the workers to be deported quickly after being processed by the courts.

In fact, many are still stuck in the court system, Rev. Brackett said, while the women who were allowed to return to their children if they wore monitoring bracelets were still awaiting trial. In addition, he said, some of the workers who were arrested returned to Postville as material witnesses in the case pending against Agriprocessors, which alleges labor infractions.

“So in looking back about a year ago, we really did not expect this to go on any longer than perhaps five or six months,” Rev. Brackett said. “And really, we thought by nine months we would only have one or two people we would be dealing with. So it really wound up being much more involved than any of us anticipated.”

Among those attending was Erik Camayd-Freixas. He worked as a government interpreter for the workers during the legal processing that followed the raid.

After seeing how the workers were being treated, he resigned from his position and began documenting irregularities in the judicial process that he said were affecting the arrested Postville workers.

Since then, he’s been working as an advocate for Postville workers as they make their way through the U.S. legal system.

Camayd-Freixas said the day of remembrance called attention to the need for immigration reform.

“Postville is really ground zero for comprehensive immigration reform,” he said. “The egregious injustice we’ve seen here and the devastation, economic and otherwise, really has no justification. There’s absolutely nobody who benefited from this.”

“What we’re seeing here is the same devastation going on in communities across the country even though in larger cities the impact is more diluted and easier to deny,” he added. “In Postville you can’t hide it. So Postville shows us exactly what’s going on around the country.”